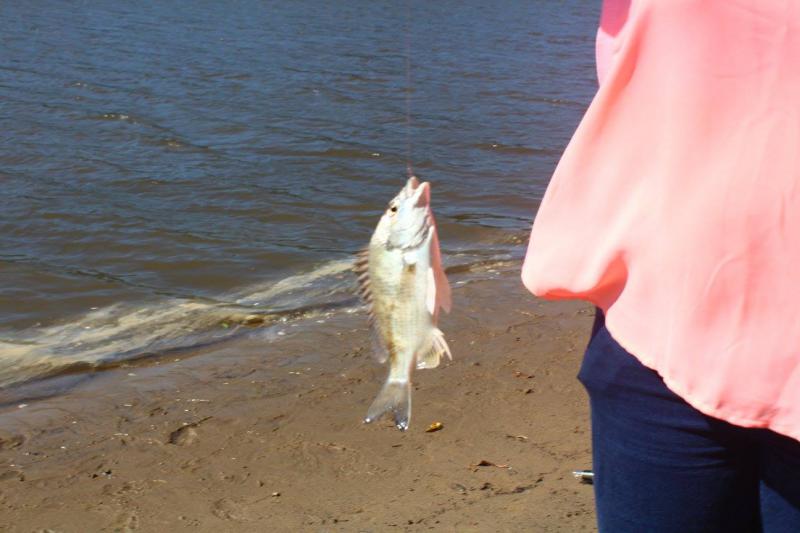 N swinging to a NE gusting 10 early evening then drops off, Max Temp 28. Barometer 1017 dropping off to 1014 and remaining steady. Wave height 1.4 dropping throughout the day to 1.2 period 9

Day starts off with an E swinging very soon to a SW for the remainder of the day gusting at midday 9 then drops off. Max Temp 26. Barometer relatively steady around 1014

Had a great time managed to do some fishing myself? Had guests on the boat and they got smashed by Pickhandle’s by the time I got the 2 sticks on the water with wire on they had moved on but hey it was fun while it lasted, Species caught: a Massive puffer, Spotted Grunter , River Bream, Cape Stump Nose and of course Tiger Fish or St Lucia Pest. Other fish caught in the lagoon Javelin Grunter, Honey Comb Ray, Cob, River Snapper.

A very fine Javelin or Morph grunter was caught at the old ramp as well as a “Massive Diamond”, I have seen the pics and am awaiting for them to be forwarded to me so I may share. All spots were busy with plenty of decent size shad landed as well as Cob, on the non Ed side Black tips and baby Greys. Still small Cob about and one of the locals lost a big Dusky Cob, bite trace broke when preparing to land the fish. Spotted as well as Long Fin Pompano can be targeted on the sand banks. Plenty to fish for.

Plenty of game fish were caught over the weekend, mainly Couta, biggest 20.8kg and a few Tuna, bottoms fished well as always although it was slow at times and reef hopping was the order of the day. Most of the Couta were caught around Gerries. Monday although the weather was good most boats were back early due to non-activity on the game fish side. Today the sea is flat as a pancake.

News from the Shop.

What a crazy fun weekend and thank you guys for your support and suggestions. Yes we are going to have an adult clinic soon. Watch this space.