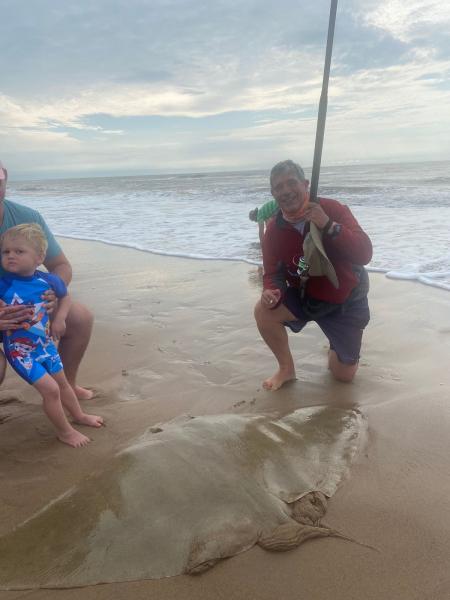 Things are not looking bad for surf fishing as we have had a lot of North wind and tomorrow is going to be nice and hot.

Wesley never stops pulling surprises, yesterday using the drift bait tactic on the outgoing tide caught a morph grunter ( Javelin grunter) of 2.5kg’s  this is a first for the river as we normally only catch juveniles he also caught some decent size spotted grunter. During the week a kob was caught with what looks like a coke tin around the back of its head, you can see buy the photo it was on for a long time, Mark cut it off and released the fish and it swam off

Diamonds are coming out, I know of 2 today so far 1 on main beach (58kg on 30lb braid) and the other I have no details but it was witnessed at Doggies. Something I learnt this week is we often catch what we call lessor sand sharks but they are not, they are lessor giant guitar fish and they can be distinguished by their spots it blue grey or yellow spots. Port Dunford is still producing big kob from time to time and he fish are very active there. Snapper cob and shad are been caught but not so many small sharks except at the Banks where they seem to be plenty full.

Hannes on his boat brought back a big kob the other day, unfortunately I cannot scroll on the watsup to find it, bottom fishing has been slow lately with the main catches been squaretail kob and slinger. Paige and Cheron who fish off Nanook have both got tagging kits for pelagic and bill fish as well as for sharks and are starting a tagging program, we will be following their progress as I believe they are the first in the club to partake in research with the above mentioned type of fish.

Fresh Mac’s and small Bonnies should be here early this afternoon.