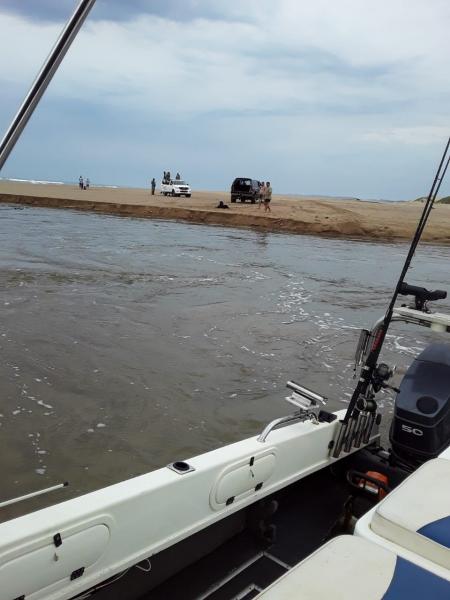 Again the weather and sea conditions are good for the remainder of the week. A few guys are launching tomorrow.

On Friday Louis and Sarel went to mark the channel with poles from the stone wall to the mouth, they did this during low tide and found logs that were a hazard to boating and returned the next day with the parks board and a bigger team of helpers and removed the log making access to the river mouth for boats and barges a lot safer, thank you guys. You can see what they got up to on the photos. After work Louis fished and caught 5 shad all were a descent size the water was clean enough for them to come in. Big eye kingfish are back and are taking lures, it seems we are in for a good summer season, don’t discount flat fish as so far diamonds, browns and honeys have been caught.

I get a lot of calls asking if the Diamonds are here yet, yes they are but not in big numbers so they are still feeding like in the winter where you get the odd one. I also take a lot of calls asking about where to fish after you have fished please drop a watsup and let me know what happened. Good catches of shad and snapper are been made together with millions of baby sharks. So far the catches have been roughly of the same species and we have had no surprise guests so far this summer I am sure like last December something like a big springer or GT will be caught. There is now a red marker to help people find the doggie beach car park, please leave it alone.

Greg and Ross found a shoal of snoek on Sunday and landed quit a few of them which has prompted some of the guys to take advantage of the weather tomorrow and go look for some for themselves. Still no couta in the bay however far out they are catching them i.e. High Point but also north of Richards Bay.

We are now stocking what they call “Gourmet “ice i.e. the ice that does not melt before you add coke. Please note we moved across the road to Village Square.