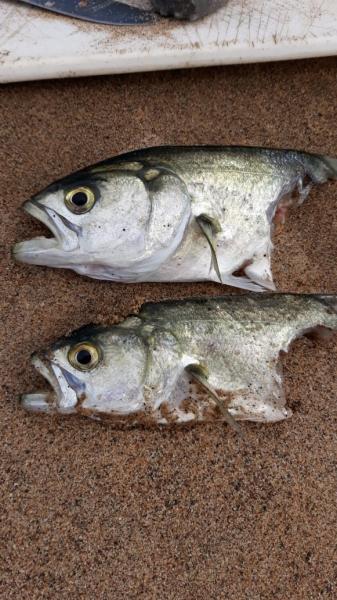 So far this weekend looks a cracker for fishing for a change.

We had 75mm of rain last night during that crazy storm, wind speeds of 175km per hr were recorded on a farm outside town and we are expecting the river to be discoloured but not for long as there has not been any more rain. Slow trawl for little pick handles these are ideal size for bait for couta. River bream, cob, bar tails and river snapper will take slow trawled artificial as well. For those that don’t have a boat walk along the river bank and look out for activity on the water , prawns and small fish are being bait balled, cast over the bait ball and retrieve slowly through it.

At last Shad season is open again, in the past week several big shad have been caught as in 60-70cm. A 70cm (4.51kg ORI) shad was caught by one of the Zululand ladies team at Doggies. While on the subject of shad Jan and Pepe had a double and it ended in tears as they both were taxed. Snapper kob are still around and should be here till the New Year. Small cob are been caught and they are very small, I think it is a good sign as they breed in the area let’s hope they hang around to make size in a few years’ time. Currently we have a lot of baby sharks to keep you busy, please handle them with care so they can grow big and strong they are milkies, spinners, blackspot, hammer heads and smooth hounds. Large sandies and diamonds are yet to show up although the odd ones are been caught. Black Spot Shark is also known as a Human Shark (Pronounce in Afrikaans as it is named after the marine biologist who discovered it in Sodwana), they are 30cm at birth and grow to about 1.2m on average. It is good to see them breeding at Mtunzini as they are protected by the MPA and are a together with all sharks and rays the only no take fish or be in possession of. Right now the fish are “on” according to a young lad that has been to the shop twice today. To the guys that fished at Doggies on Sunday, thank you so much for leaving your mess on the beach, Chris really enjoyed cleaning up your mess.

We still waiting for the game fish to show up in numbers in our bay however fishing out of Richards bay at the moment seems a good choice and head north towards Dawson’s or even High Point.  Bottom fishing has been slow recently with not many big catches for some reason. For some reason there are not a lot of kob about.

We have now moved to 5 Station road about 70m up the hill in the white shopping centre.