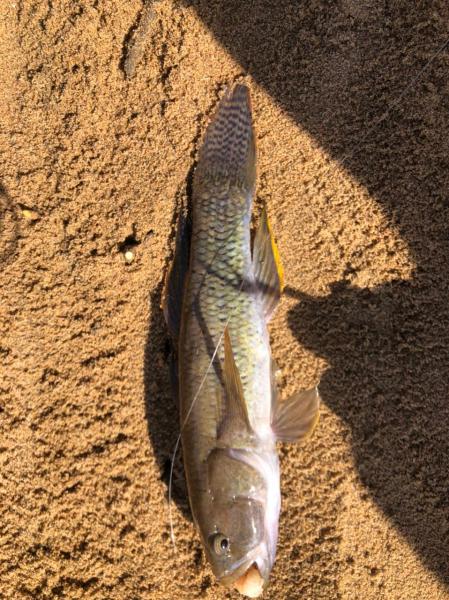 Apart from this evening we have no more rain for the rest of the week so fish we must.

River Snapper were on the bit again and some decent size ones, Wesley bagged 3 on Saturday. A member of the public pulled out a gill net on Saturday afternoon and released all the live fish and crabs of which one was a very nice size spotted grunter, most of the fish were mullet and river bream. A not often caught fish was landed over the weekend by Christiaan, a river goby.

After Pines geelbek we thought that would be the fish of the week however young Mark spoiled that with a 50kg plus dusky cob. Plenty of barbels were caught which is unusual from the surf but maybe that is because the water temperature is around 19 deg, the surf was up over the weekend with reports of a strong side wash at Red Boom. Garrick are about with a few caught during the week, if you don’t have a boat fishing from the North Bank at Port Dunford will get you onto the fish.

Richard on Esquire went out on Friday and reports the surf was quiet hectic and after is settled late in the morning they got some cob, slinger stacks of barbell and released a big yellow belly rockcod.  Saturday the surf was up and Gawie turned back from the mouth and surf launched on Sunday from Garlands and got some cob and slinger, on the way out they saw some dolphins but no whales. By all accounts not a lot of fish were caught most of what was caught were barbell, slinger and cob. Johan reports at 2 spots he fished had slime so maybe the slime was putting the fish off.