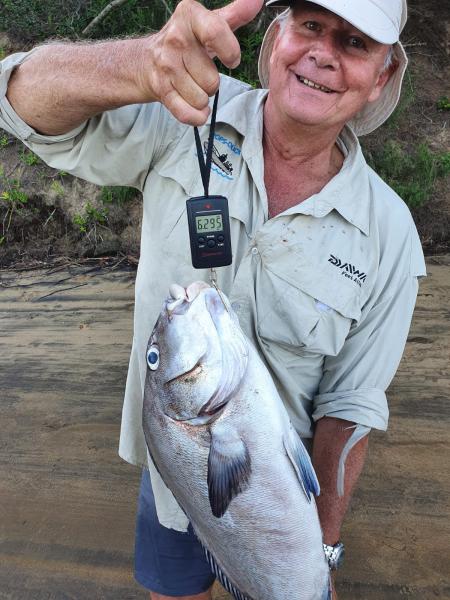 We have good weather for the remainder of the week bar Saturday when some showers are expected.

Oom Chris is down on holiday went fishing at the lagoon on Sunday to hide from the South wind caught himself a little Diamond Ray, these fish are making a habit of been caught in the lagoon as opposed to the surf. Louis while testing his new boat was trawling along when Caden’s rod went and he landed a very big River Bream, lately a lot of these big specimens have been caught. Lots of juvenile fish are been caught in the area of the main car park as are big Mud Crabs, soon the females will leave the estuary and head far out to sea to lay their eggs, if you catch a female with eggs please put her back, the eggs in there initial stages make up plankton.

A big Shad was caught at the mouth on Saturday, no further details except a picture asking me what kind of fish it was, the picture was sent in by a walker. Heading south not a lot of fish were caught right the way down to Boyeni where a youngster caught a Walla Walla in the surf, these are good bait. There were reports of side wash and weed at the banks but after the side wash of last week at least the sea is settling again. Garrick are in Richards Bay so they coming passed here, the best spots to catch these fine fish is the north and South area at the river mouth and in the area of the stone wall as well as in the mouth itself. Mullet will be the best bait to use however when the Garrick are about they  are very hard to come by, we also use Shad 30-35cm however they are also scares at this time of year,, we think they go out deeper as Garrick are known as shore zone feeders so the little Shad feel safer in deeper waters.

Some nice Couta of which I am lead to believe of over 20kg were caught at Patinga on Saturday. High Point produced some Little Eastern and Yellowfin Tuna, closer in Koos got about 18 decent size Natal Snoek. Game fish are defiantly about. Bottoms was slow however Shaun got a big Rubber Lip of 6.5 kg, the boat managed a few Cob and Slinger. Willie took his boat out at 2.45pm and were back at 5, they fished close in at one reef and all the crew got some fish. He was going to launch out of the North Channel when the sea went flat in front of them and they shot straight out.