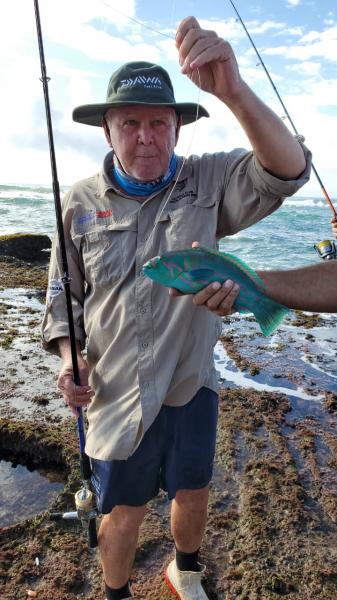 Week’s weather does not look to bad with little wind to effect fishing and no rain forecast which is good news for the campers.

Apparently the river fished well over the weekend with lots of River Snapper been caught at various spots on both live bait and Lures. This morning we were chatting in the shop and we were talking about how effective big Glassies are as live bait but the problem is it seems they have vanished, we used to get big shoals of them and the kids used to catch them with Kiddie nets or we would trap them as we know they tend to be “top swimmers” we wonder if they have been killed off in the gill nets.

4 Diamonds were landed at the Banks of the weekend and some nice size Rockcod were caught just south of the Banks one was 69cm I think. I took myself to St Lucia for a few days fishing and caught 4 Species of which 1 was a Surge Wrasse and the other a Ladder Wrasse a Grey Grunter  and a nice Blacktail, which makes a change from Spinners, Milkies and Snapper Kob that are the main fish been caught here at the moment. I also got a hiding from a big shark that still pulled line out on full lock as fast as it wanted to and then my line snapped a hiding given and well deserved. I slide a whole baby Chokka with a Sard stuffed inside, my 2nd pick up with the same bait was probably a baby overzealous Milky and he took half the bait off without the hooks setting.

Action while trawling a Bonnie for Couta got taken by a 20kg GT and gave him gears for about 30min before getting it to the boat and after carefully removing the hooks he released it to live another day, well done on the release the reminder of his catch was big Bonnies so at least they had “Action”. Joerie on Frigate went to the Gerries area and was luckier there as they boated 8 Couta although most were small they managed 3 good size fish with the biggest at 16kg.