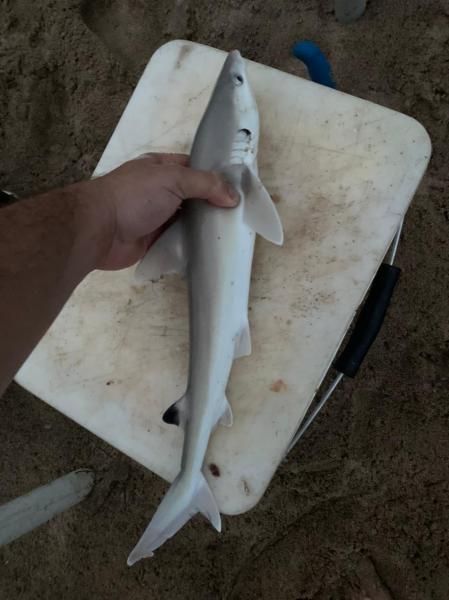 This week right through till next weekend we are forecast to have easterly winds blowing nearly every afternoon making the morning fishing sections the most important , as we say here “east is least”.

Pickhandles everywhere and seemed quite a common catch over the weekend most are too small to eat but make a good bait for deep sea. The River Snapper seem to be off the bite but plenty of small Grunter, Stumpies, River Bream and Crabs were caught keeping the anglers busy. Some decent size Grunter were caught on live prawns, this can be caught in the shallows using a kiddies net and some chum, you got to be patient and quick but this is the best method to catch them unless you are at the mouth then a cast net works well again work the shallow water.

Michael caught a type of Shark that is not very common to our waters and very little is known about it, it is called Human Whale Shark or Black Spot Shark, this was named after the guy that discovered it, they are thought to grow to be about 1m and on the same trip he caught a baby Zambie. The Banks produced 2 Diamonds yesterday the one Brett got was about 55kg and no big sharks, the thought was the water is too warm. Stumpies of variously sizes have been caught over the last few days, we have not seen these guys here for quite some time in numbers like this. Snapper Kob, a small GT, Spotted Grunter, Large Spot Pompano, Shad (not very big ones) and Brown Skates making up catches recently.

Ross and Greg managed some nice Couta but were also plagued by sharks taxing them, during the trip Ross was using a spoon and picked up a decent size Sailfish a couple of jumps and it threw the hook. By the looks of things these 2 will be taking first and second at the Couta Classic. Shaun on Pops Duck seems to be the hottest boat at Morph Grunter fishing as he bagged some more over the weekend, Gawie and Stefan got some Kob and some other bottoms over the weekend most boats complained about been pestered by big sharks, it seems like the Rock and Surf guys should go with to keep the sharks busy while the ski boaters fish. Action on Nanook went out deep and got some Tuna and a Ka Kaap (hope I spelt it right). One boat spent the whole day out and managed a Rockcod between them and they more than made up for it in the bar afterwards, so much so they never made it to the launch site to fish on Sunday. Believer skippered by Fritz went out of Richards Bay and managed a Dorado and not a bad sized one at that.