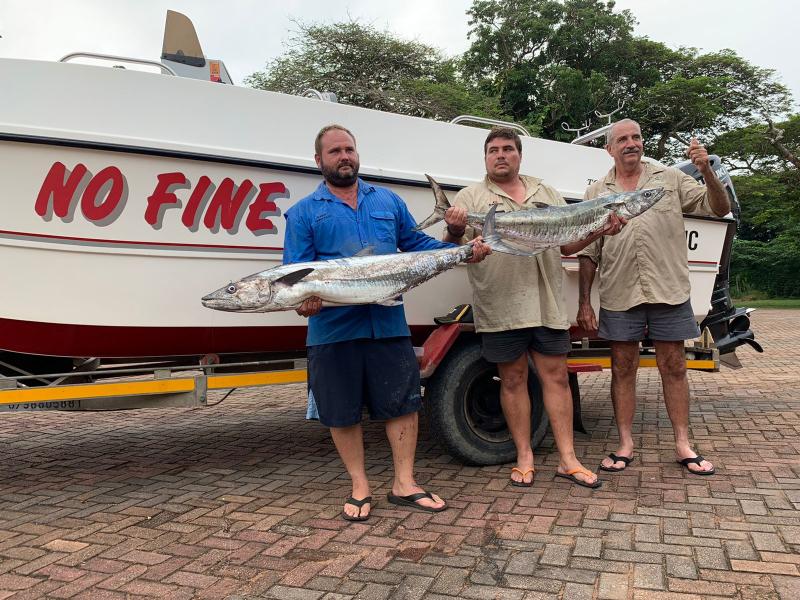 This week looks to be rather cool , we start the week with big swell settling as the week goes on , there wind will not be strong  and most mornings it is coming from the N and we expect a good weekend of fishing.

Fishing over the weekend in the lagoon was very good and some nice size River Bream9 one weighed 1.75kg) River Snapper between 2-3kg with one about 4.5kg were notable catches together with Kob and lots of Javelin Grunter, the Kob were not making size but who cares it is still fun catching fish, the water is not as dirty as we would expect after all the rain.

Surf fishing has been slow with some edibles been caught but the big fish remain elusive and that is not for  the lack of trying, on Saturday we fished old ramp and even I managed a little fish it was a Shad making size but because it was hooked through the tongue on a circle hook of all things it was quickly converted to bait as I thought with the damage done it might not feed anyway that is me humanizing a fish again, Neil got a small Kob and then the water ran away so we packed up, despite fishing with a trapped Sciatica nerve it was fun, what was a first for us was having a Voltaren injection on the beach but it had to be done. Elsewhere it was much the same however when the tied came in on Saturday afternoon the sea changed for the worse with Sunday fishing the main beach seemed the best option as I believe Red Boom was unplayable so I imagine the banks not to be much fun either. Looking into the week the sea starts settling today and we think we will have a good fishing weekend coming up.

Some boats managed to get out on Saturday morning while some turned back, there was a very big backline making launching very easy, chatting to Willie who on his maiden voyage on his new boat was one of those that turned back and he felt the guys thought he  was not up to it, I said to him only he knows his limitations and rather bring yourself and crew back safe than pushing yourself and coming unstuck and hurting all, no skipper in their right mind will tell you, you are not up to it, little boats are not easy to get out in big swell and experience will tell you that so guys don’t feel pressured to go after all know body knows your limitations. No Fine skippered by young Louis was one of the few boats to get out and they headed for High Point and boated 2 nice Couta while the other 2 boats stayed in local waters went hunting around the Gerries area were not so fortunate so settled for some bottom fishing, young Shaun skippering Legal Duck put his crew onto some very nice size Morph Grunter which we have not seen for some time. Gert who is leaving us to move to George had his last outing and managed to get out and also caught a few bottoms but was probably disappointed in not getting at least one Couta. Jannie on his jet ski was on his way back to the slipway when he spotted some Tuna and he set off in hot pursuit and managed to catch one of about 12kg as they say nothing is over till the fat lady sings. Let us see what next weekend brings.