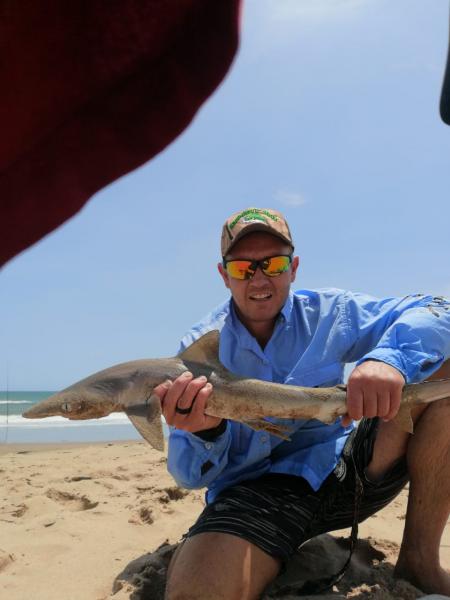 Warm days and the wind is playable however we on a low barometer most days so hang in there and chill fishing we expect will be slow.

Another what we suspect as an Estuarine Pipe fish was caught over the weekend exactly a year since the last one was reported, these fish are previously thought to come back from extinction, please study the picture and confirm either way, this is very important we get the ID correct. In spite of the rain the water does not appear to have discoloured as much as we expect so the fish are still there. Yesterday an angler using a River Bream as live bait hooked a 340cm Zambie which gives it a ORI weight of about 700kg, this is after we deducted the boat and angler weight, it took several hours to come to this conclusion as we had to correctly estimate the remaining fuel as to get to a more accurate weight. In order to achieve this accuracy we designed a compute module, patent pending.

For day visitors the gates at the park are open from 6am to 6 pm to fishing permit holders only not for children and family members to have a day out we have to wait for 11 more days to see if the status changes, please do not abuse this and be the reason the park is closed to angling, I see there are issue further south and the anglers have been told to toe the line or else. Fishing was busy yesterday been the first opportunity to have a proper fish for the year and almost everybody got a something, Lee-yager bagged himself a 54cm Snapper Kob which is probably the stand out fish of the day as it is not common to get Snapper Kob that big, there were bigger Kob caught of over 60cm as reported by Tulane however they were squaretails. Chris managed a Diamond at the banks while Neil and his gang also fishing their settled for Shad and rats and mice. A picture was sent in by another Neil of parasites on the fins of a Milky this is the feedback I got when asking if they will harm the animal and must the anglers pull them off like we do with the Kob “They can but I wouldn't worry. They are skin parasites and won't cause any major problems”, this Neil also caught quiet a big Silago which Gerhard stole and put it out as live bait but was not picked up. Christine caught a fair size Kob but it just did not make size so back it went, Rudi caught quite a few Milkies on one of his outings and took a brilliant side on picture of a mature male, note the size of the claspers.

The Umlalazi Ski Boat armada took to the seas in great spirits, the Rubber duck Club been the major contingent various tactics to catch game fish were planned but alas it was not their day with a few bottoms been caught, speaking to a few skippers the fish were very slow to bite and far and few in between inflight of the fact the rock robbers were on the fish it was suggested next time the anchor in the mid break and fish there (Stefan please don’t try this I am only joking) The boats that went out deep fared better as some game fish were caught in saying that on old year’s eve Pieter got 3 Dorado and dropped a couple more including a decent size Couta, this was in the bay or close in. Just in Byron on No Fine boated a 25kg Couta making it the biggest so far this season.

We had a very busy December holiday season and thank you all for your support, it was fun seeing the old and new alike and we hope you all made it home safe and are not sitting at your desks this morning feeling grumpy. We are as the shop is like a morgue.