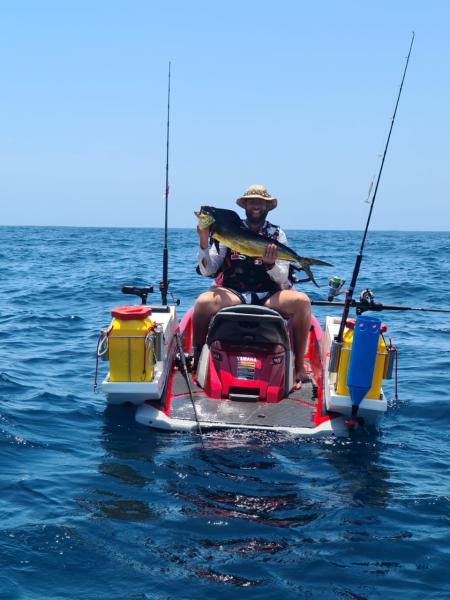 The weather for the remainder of the week going into the weekend looks great for fishing, as last I can right that after the wind we had over the past few weeks. We had no electricity for most of yesterday hence the late report.

Rudi van Rensburg sent in this report “We managed to catch multiple species. All on poppers and rapalas. 4 kingies, 2 bream, 3 pickhandles and one shad. We noticed a shad trace with a white float bobbing in the area of the main car park and it was moving quite fast. We realised something was on the line so my friend made a cast in front of the float and managed to hook it. What happened next might sound unbelievable... A massive fish erupted and took off. Obviously someone hooked the fish and the line broke. He fought it for about 3min and when the fish came up next to the boat we saw it was a massive pompano. Must have been around the 5kg mark. As i reached for the net the fish made one last run and the line parted from the popper and the fish got away. Not sure why a pompano would come into the river system. All my time spent on that river i have never ever seen anything like this.” Thank you for sharing this with us, during the river clean-up we observed this fish and it went towards 2 guys on a boat. I have never heard of Pompano’s in the river either. Regrettably the River Family day has been cancelled.

At the moment the beaches are closed as per the days indicated by the president and there is a lot of debate about whether we can fish on those days or not, we have not heard back from the Parks Board however if one reads gazette 43997 they talk about permits and we think the gazette is referring to small scale fisherman and not recreational licences as per the Marine Living Resources act. There are plenty of big Shad and big Sandies about at all spots with the Banks producing the most, work hard and use good bait combo’s ie Red Eye with Mac Fillet, Chokka as is or with fish bait fillets, Shad heads and fillets are also doing well. If you don’t catch a fish in one spot move away from your base to the left or right and look for where they are feeding.

At last Mtunzini area is producing Dorado and some Tuna with Ross reporting they lost a decent size Couta. Pieter bought a new jet ski and on his maiden voyage the 2 jet skis got Tuna and Dorado. Bottoms have been okay with either catches of Slinger or Just Kob manly been caught with a few other species, unfortunately there has been a lot of shark activity which is really good for hook sales butt very very frustrating for the anglers, Gert just told me on Sunday afternoon on his boat they lost  about 20 hooks.  The weather looks good for boating through the week and into the weekend,  make some Couta traces tomorrow if the beach is closed.