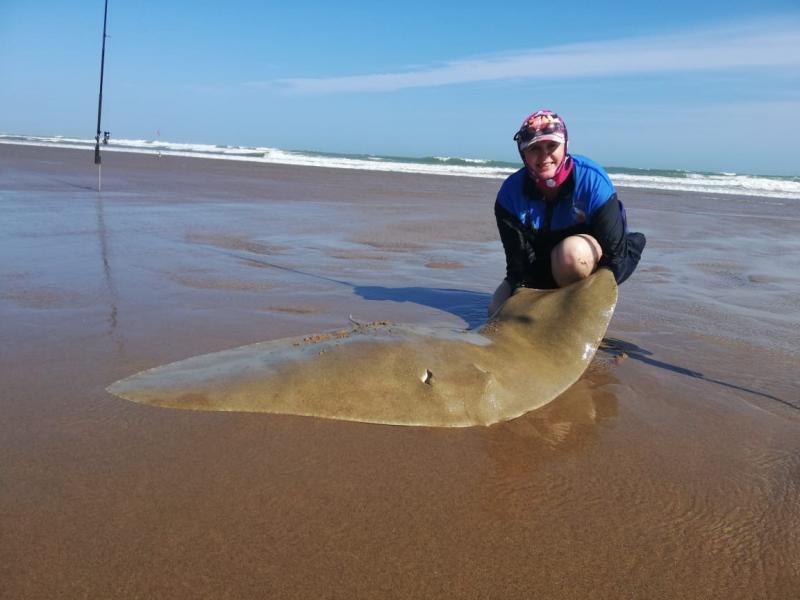 It is going to be a hot week with some wind in the early part of the week, we have some rain forecast this afternoon but apart from the not much rain later in the week.

The lagoon seems to have been busy yesterday and Willem reports he got 9 Pickhandle Barracuda and one Brassy Kingfish before the sun got the better of him. The big Grunter caught last Sunday was on live prawn, these prawns are often seen swimming along the bank of the river and can be caught in kiddies nets. Rockcod and Rays are still been caught as well as River Bream, the River Snapper seem to have gone quiet. Two guys have taken Occi leg to the lagoon to see how that works.

Susan got herself a nice Diamond yesterday, the rod was in the pipe and when the Diamond took off with the bait it bent the stand , she said while fighting it, it was a feisty  one, after playing it in it weighed in at 51Kg (Ori) which gave her some nice points. Young Willie fishing in the same area landed a PB Shad of 4.1kg these were caught at the river mouth. On main beach Mergan caught 2 Diamonds 37.64 Kg and 42.87Kg (Ori), they were fishing to the right of the main beach in front of the Siyayi River. Moving South going through Garland heading down to Boyeni it seems as though only rats and mice came out however Vino caught a Brown Skate and had his Kob taxed only the tail was bittern off we not sure what it was that bit the tail off, it could have been a Shad as in Australia they are known as Tailers because they bite the fishes tail off to disable it before ripping it up with those sharp teeth.

Apart from Ross and Greg who went to Cape Vidal over the weekend nobody seemed to have gone out locally, they did manage to get some very nice size Dorado and a Couta so it was worth the  effort , one of the sessions they fished through howling wind.