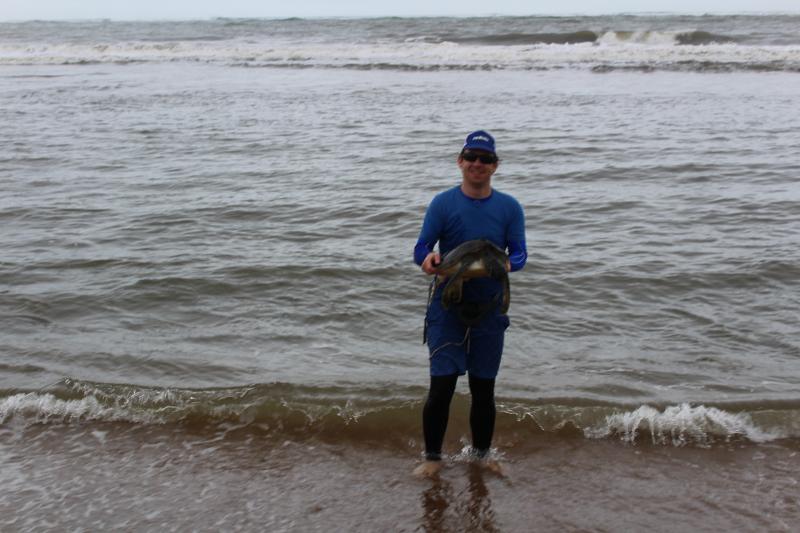 Fishing has been quiet slow Quinton has been struggling to set his hooks when he has big runs, we think there are flat fish in the vicinity of the main lagoon car park on his next trip he is going to use a 4/0 hook, his son Talon has been luckier in that he has been landing some nice size River Bream but is too quick to release them so we have no photos. The big Giant Mud Crabs are back on the bite, if you want to land them don’t rush them take your time, if you don’t have a net use another rod as the crab is coming out of the water they often let go of the line, use the other rod to tangle line around the crab so it can’t escape. Some guys  on a barge managed several species yesterday, Bar Tail, River Bream, Shad and a few others.

At least this weekend Rudi escaped a beating from Michelle so we have no crocodile tears outside the shop. After last week of virtually no fish been caught we had some action and it all started with a Turtle. At 8am we got a call from The Banks that there was a turtle been washed about in the surf so I asked the guys to hang on and keep it under observation I will get the parks board to assist, we left the park via the main beach ramp and on the drive to the Banks we never saw one angler, when  we got to The Banks  we saw only Wian and Eon (they had not caught anything yet but had encountered a lot of weed) Eon waded into the trough and bought the Turtle onto the beach after consulting with Trueman (Our park OIC) and Santosh ( Emzevelo Marine animal rescue) it was decided as the animal was so week and it had what appeared to be an air bubble in its carapace we would bring the turtle back with us and send it to Ushaka Marine World in Durban, on its arrival it was in a very bad state however after giving it a dose of vitamins and food she perked up and was becoming more alert, this morning she will have tests and x-rays. Emily our previous rescue is still there but is on the mend. Vino bagged a decent size Kob on the main beach yesterday but all the other anglers reported small Kob and Shad been caught, lets hope the fishing pics up.

Andre and Greg went out yesterday and got a nice big Dorado and some Yellow Fin Tuna in the High point area. 3 other boats went out of the mouth but none actually launched it seems as though they got to the mouth and fished in that area, during the week as usual the weather looks good to go out let’s hope it lasts till the weekend.