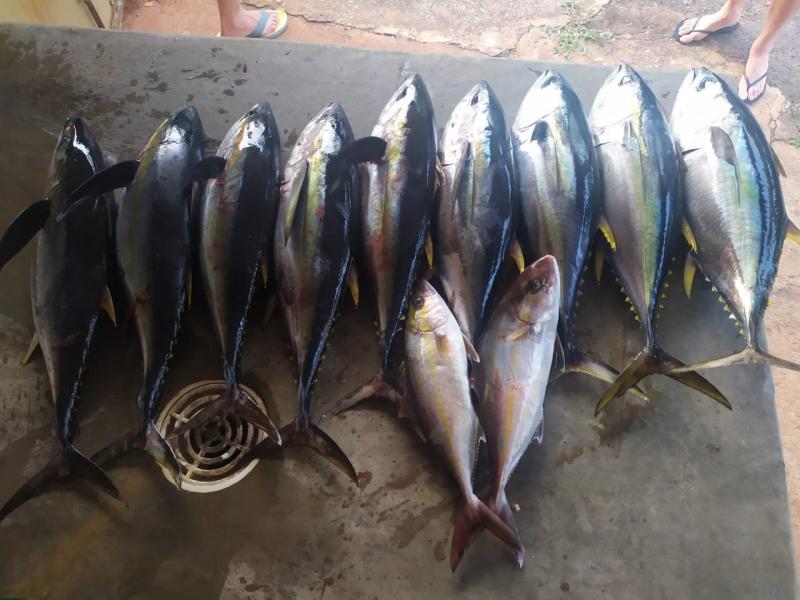 We have a crazy week ahead of us with every second day going over 30deg, with SW and NE winds with big seas.

I was on the river this morning and we fished the area of the stone wall and watch helplessly as 4 local lads were catching nice size River Bream with hand lines and we managed a crab between 3 of us, I offered them our bait when we left and I could see the fear in their eyes for 2 reasons one they did not want our useless bait and 2 if they did not accept it they were going to be forced to accept it hahahahaha. Yet again this proves River Bream are best targeted close to the shore but no what do we do? We stand on the river bank and belt our baits into the middle. Louis and the kids included our Angling club chairman got stuck into a variety of species of fish in the main car park namely Grunter spotted and Javelin, Cape Moonfish, Brassy Kingfish, Shad and a few others so although the water has not settled it is still fishable.

Friday night was the best chance to fish all week and Gerhard and Willie went for a throw as well as some others, they caught a undersize Kob and an angler fishing nearby tagged it, nice to see guys are still out there putting number plates on fish well done that angler. On Saturday morning some guys went down and were rewarded with Snapper, lots and Small Shad and spinners. Today the surf was very big making fishing not very comfortable.

Sarel and crew headed out on Friday after been land locked for so long and were rewarded with some Yellow fin Tuna and 2 Tropical Amberjacks, the was some debate as to what type of fish the Amberjacks were as some members were convinced they were Rainbow Runners, this created some good banter in what turned out to be a rather boring game of rugby or was it because a bunch of anglers were sitting around the table chatting about Sarel’s trip and having a laugh. Just some useless information in some countries Amberjacks are called the Donkey of the sea, they lie around the bottom of the sea and when caught kick up a hell of a fight, there are also several different types of Amberjacks. The Amberjacks were caught on spoons jigging. Whilst they were out there Sarel picked up a Dusky shark of about 2m that kept him busy for nearly a hr before they cut it off next to the boat.