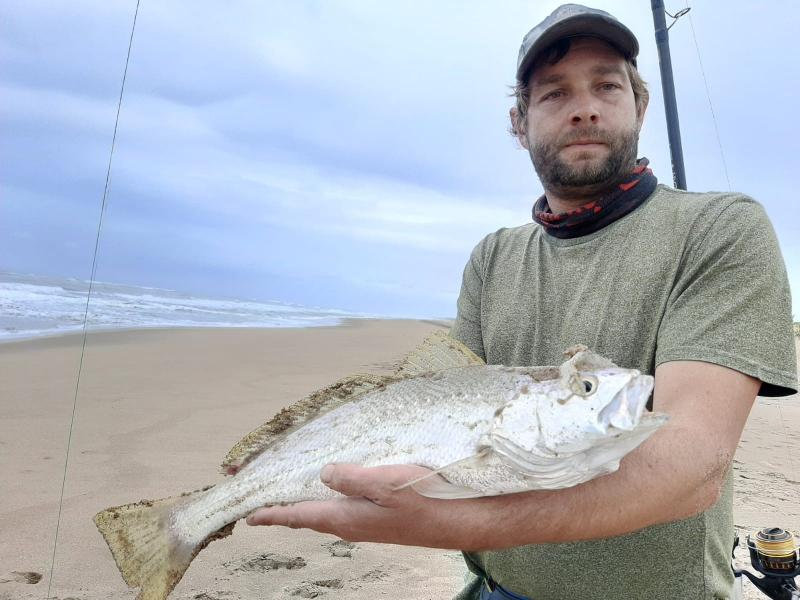 Big swell around 2m is forecast for the weekend, we have a good dropping barometer on Saturday afternoon going into the evening. Not much rain is forecast and the wind is not too strong so we have a fishable weekend.

The lagoon water is very muddy at the moment and the best spots to fish will be up at the mouth probably on the incoming tide. Some catches were made during the week mainly small Grunter and River Bream and Barbel and Talapia in the Siyayi River, fishing there in incumbent weather seems to be getting quite popular.

Some guys managed some fish during the week, Gerhard and Willie went fishing early in the morning on Wednesday and managed to catch 3 Kob which were quiet big but under 60cm so they went back as well as 2 Rockcod which also went back. Spinners and those silver fish called Bush Bream were caught as well as some Lessors whilst others were not so lucky. Often we walk onto the beach and set up camp and start fishing , when you see other guys catching move closer to them or look at what water they fishing in and move to a similar spot better still look at where they are casting , sometimes we casting over the fish sometimes they are feeding in front of or just behind the shore break then again sometimes they feeding on the mid bank and you have to cast there, if you are in a group fish and a few different distances till you find where they are feeding.

Looks like ski boating over the weekend will be rather bumpy and not much fun. During the rain the Park is closing the slipway road this is to try get it to settle and harden up.