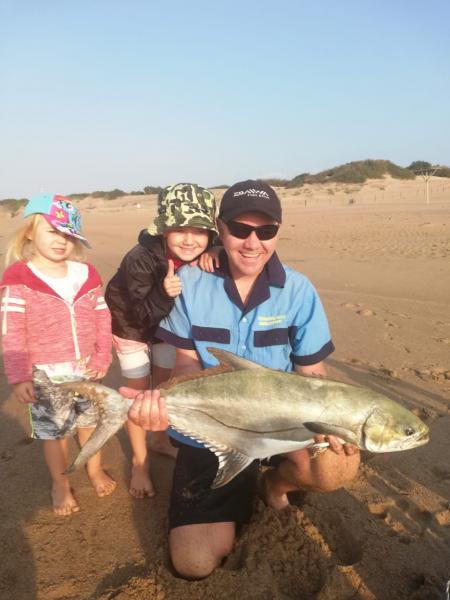 Today and tomorrow we have big swells which will start setting on Wednesday and we have some very hot weather coming in starting on Wednesday, fishing will be good, I predict Friday been the best day.

The slipway road is now open and done and dusted a big thanks to Steve De Langer and Scribante construction for making this happen and finally thank you all for donating money to the Honorary Officers to pay towards the cost of the operation. Park hours remain at 6am-5pm for the time being the park is waiting for head office to advise when camping will be allowed and the gates closing at 10pm. When the park opens to 10pm again we can sit for Kob with live Mullet, get a braai going and wait.

After the Cobia last week over the weekend Louis while targeting big Shad caught a Garrick on a Shad rig with Mac fillet as bait, surf fishing is not always a dull affair, he did get his big Shad on a Sard fillet as well as a small Spinner. Note the Garrick do bite on steel, I have caught them on steel, seen them been caught on steel and now Louis got one, if they hungry they will eat. Shad were caught all over the place this weekend but not all were busses, Mark was fishing at his spot and they observed Garrick in the waves, a live Shad was slid out but they did not get a pickup. No reports of any non eds yet however on Wednesday we are going to go try get some, we are not sure which beach we will fish at but Port Dunford is looking good as the channel from the river mouth is running that way. On Saturday Mtunzini Angling Club and some members of the public joined the Honorary Officers for the Siyayi Coastal Park for the beach clean-up, 873kg of plastic were collected from the mouth as far as Red Boom. The next clean will be from Emboyeni up to Red Boom, well done to all who participated. We had to limit the participants to 50 as we were still I Lock Up level 2.

The slipway road is complete and is not closing again this week as was planned. We have no reports of boats that went out over the weekend. Wednesday and Thursday look good. The channel is running at about 10.30 or towards Port Dunford, on Saturday when we were at the mouth the water was screaming out and we hope it pulled a lot of the sand with it.