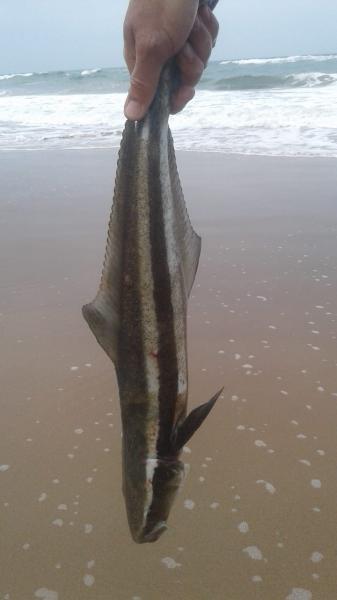 The weather isn’t looking bad for fishing over the weekend it might be a bit rough at sea but fishing from the shore or lagoon should be fine.

The road to the slipway might open later today, they were delayed by the rain on Tuesday and someone then drove on the wet road so that had to be sorted out otherwise they will open it tomorrow. In front of the stone wall or what’s left of it is a log under the water, with Springtides over the weekend the anglers who reported it seems to think a boat will hit it at low tide he advises to stay about 4m away from that area. The water is very clean still especially at the area of the mouth, I think lure fishing there will be good especially if the big Shad come in.

Fishing in general often throws up a surprise or two  and on Monday John Horrell enjoying a quiet fishing session on his holiday landed a 4 kg Shad (PB) and was over the moon only for a few hours when he then caught a Cobia from the beach, this is a very rare catch indeed especially as they are not known to frequent shallow water except when breeding and this fish was not sexually mature yet making the catch more unusual it gets worse, Cobia’s diet comprises of various Crab species and the occasional Cray fish, this one was caught on Mac fillet. Vino on Tuesday after the rain caught 4 Shad all over 2kg not bad for a short session in the afternoon there are still a lot of big Shad about during the day. Kob are been caught at night a various places mainly on Chokka and Sard or Shad fillets. Unfortunately a lot of fishing spots are suffering with weed, move away when the weed comes in and find a spot without weed there are normally gaps in the weed, we are hoping the weed washes out during the high tides over the weekend.

People are asking where they can launch while the road is being prepared, over the weekend we will be able to use the slipway and during the early part of next week when they put the binding agent down, you can use the old slipway in the main lagoon car park, failing that use Garlands.