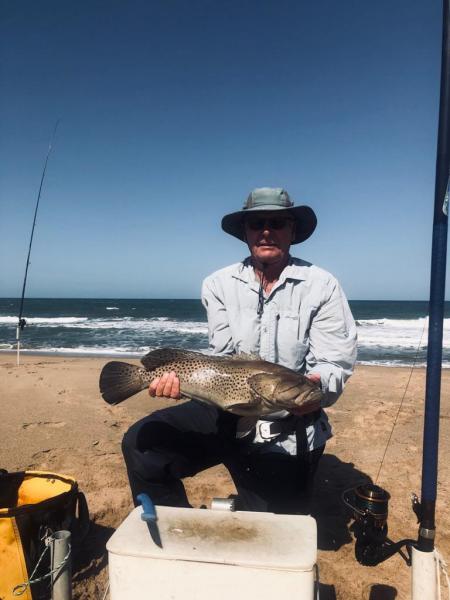 Another windy week have ever last week there was a similar forecast and the guys fished and caught fish every day except Wednesday.

Great excitement the other day a Giant baby Garupa or Brindle bass was caught and immediately released without taking pics etc. it was released while still in the water, well done that angler, from time to time this fish are caught being endangered and slow growers it is nice to have them here. Good catches of decent size Spotted Grunter and River Bream are still been had, go look for them.

Currently the water is very clean with small waves, I  was up at the river mouth and noticed a lot of guys fishing at Port Dunford, this is a great place to fish in the North wind especially if you walk a bit north as the wind is blowing from behind you. At the moment we are still busy with “Winter Fish” but the Diamonds are starting to be caught in small numbers and it will not be long before we start “Summer Fishing”, the main fish the guys are looking for at the moment are Kob, Garrick, Big Shad and the Snapper Kob are starting to make an appearance, according to the Marine Living Resources act these fish may be kept at 600mm. even though it is early occasionally the baby Hammers are caught please get these guys back in the water ASAP to ensure them a better chance of survival. Rockcod are still been caught at a few places from the beach, it seems as though the big seas of late have open the inshore reefs up.

The mouth is very shallow at the moment with the channel running out at 10 o clock or north towards Port Dunford, there is a log lying in the narrow channel if you using the channel running south of the river just before you join the main channel. I believe there were good catches of bottoms over the weekend and one boat got 2 nice Natal Snoek fishing close in.