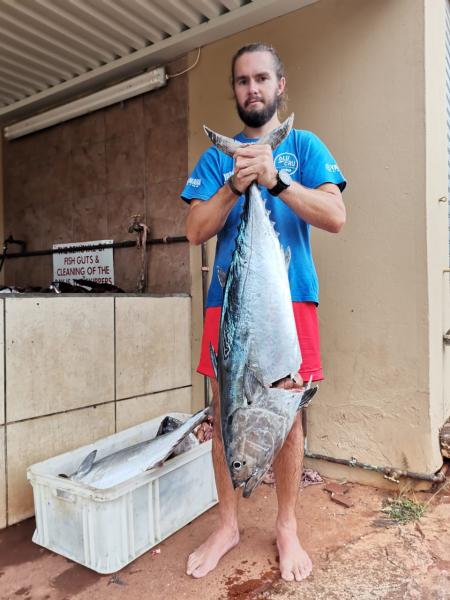 Although the unsettled weather continues into the week the sea is not as bad as the weather report shows, take it day by day.

Another Zebra was caught over the weekend in the slipway area this time, the other one reported was nearer the mouth, even though we had rain over the weekend it was not enough to make the river muddy, so with the water staying clean this can only improve your chances of catching Shad, use big fleshy baits. Nice size River Bream are still been caught a regular intervals and they take any bait presented to them, they tend to feed along the river banks and near structure be it drop offs rocks or even logs in the water.

I was on duty on the beach this looking for a dead turtle, which we found took pictures and buried it however there was no one angler to be seen and the waves were small but big enough to churn the sand up and the colour was what I will call cloudy blue and not sandy. I know people are planning trips tomorrow despite the sand. Some nice size rockcod were caught from the side again together with a lot of Shad by sounds of things down Emboyeni way saw most of the activity . No reports of Garrick were caught although they still due to be here for another month or so. Young Michael and Chris reported catching a Lessor Sand Shark that gave birth to 7 babies which were hurriedly released and swam of to live to be bigger ones, unfortunately in all the excitement they did not take pics as getting the babies back into the water as quick as possible was a priority. Snapper Kob are now starting to be caught in the surf zone, could this mean the summer fish are arriving early.

Kiru had an exciting day out on Saturday besides catching some Tuna Mathew Rochford caught a 16.3kg Little Eastern Tuna the current world record is 13.5kg, makes this a fine catch indeed well done young man. Nanook fishing in the vicinity were no so lucky but still managed to get some game fish. We are not sure what the other boats caught that were fishing in the bay area.