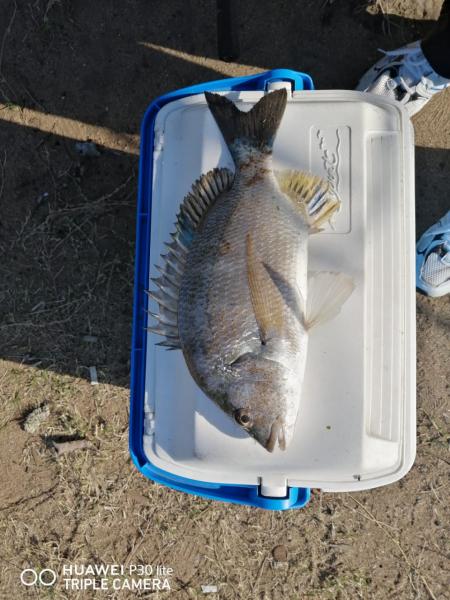 We in for a cool windy week with the predominant wind coming from the south, not fun at all after the nice hot  weather over the weekend. The swell does not look to bad till about Thursday when it climbs over 2 m.

The water in the lagoon is still nice and clean so much so people are reporting seeing big Diamonds on the sand banks in the river mouth area, as one young fella found out the hard way, he was walking along with sand bank with his go pro when he bumped a Diamond Ray unknowingly the ray got such a fright it jumped right out of the water knocking the little fella over talk about bad luck. Some very nice catches of River Bream have been made all over the river on a great variety of baits.

Most of the weekend the surf was very flat making fishing very slow, some eds were caught but in not great numbers mainly Kob and Shad however at all the spots Spinners were caught however what is unusual for this time of the year Baby Hammerhead Sharks were caught, not a lot like November and December but they are here. Diamonds are now starting to be caught in other spots beside the River Mouth area so let’s hope we have a bumper season with them this year, last season was very disappointing.

This weekend fishing was very slow with everybody struggling to find decent size fish, it sounds like although there were a lot of species caught they were on the small side, a holiday maker fishing in the Rooivalle area on Sunday afternoon caught a Dageraad which is an infrequent visitor too our waters it was about 5kg, a nice big fish they also got a Lantern and some Slinger there. Action had a interesting experience with a shark “Bigger than my boat” giving him a hard time.  Louis got a nice big rockcod that gave him a hard time he eventually got it to the boat and let it go, as we know Rockcod are breeding now in the winter and if you take a male off a reef there females will not breed on that reef as there will probably not be enough time for one of the females to change to a male before the breeding season is over, he did the right thing. Shaun and Gert also complained about the “peckers” however a bad day on the water beats a good day in the office.