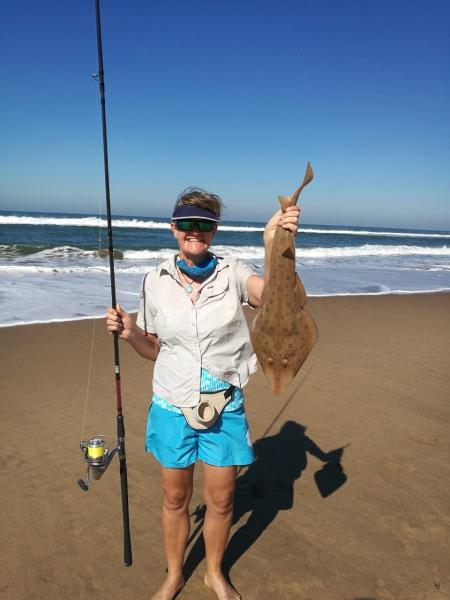 Looking ahead into the week we will be having some rain on Tuesday evening through to Wednesday morning, it will be windy during the week but not unfishable.

There was an incident yesterday when people picnicking at the slipway parked there vehicles on the slipway and would not move them so the guys could launch their vessels, parking on a slipway is not the best place to park at the best of times because of people like me that reverse wore than an eel swimming backwards. Please don’t park there, if you get asked to move please do so and not wait for the park management to instruct you to do so. Anyway back to fishing, with the clean water going right up past the Empangeni road bridge there are a lot of good spots to fish and with Spring tides just passed there are a lot of deep holes some as much of 4m, drive slowly and find them or pop in the shop and I will draw a map for you. Shad are still in the lagoon and making size. With accommodation opening up I assume it will not be long and the camp sites will open up.

Garrick were caught on both Saturday and Sunday at Port Dunford and the south bank at the river mouth, they are all fairly decent size fish around 10kg amongst them are some big Shad 2-5kg, they are also taking live bait. On the main beach most of the catches were Spinners and Lessor Sand Sharks however a Catface Rockcod and nice size Spotted Grunter were caught. The area from the banks to Emboyeni were clear of community unrest and the anglers made a return there but not much fish were caught,  on Saturday the banks were quiet, Sunday things were a little better with some Shad caught. Oon Friday night it was reported there were no anglers at any of the spots however Saturday saw the return of anglers and some poor fellas were fined for driving on the beach, next time they get caught they will be more poorer beside losing the vehicle they will need to by shoes for the long walk home.

This is another tip I picked up about what type of clothes to wear especially when fishing at spots where you wade. A few years back a group of us were fishing on Zinkwazi beach when a guy who was not part of our group got washed out to sea and if it was not for the life guard he probably would of drowned, he was wearing a type of jeans with lots of pockets on and it was the weight of these jeans that led him into difficulty while trying to swim and he admitted this when the life guard got him back to shore. I know it sounds crazy but choose thin light shirts, shorts or longs made of quick drying material as this material is light when wet and does not restrict your movement, you do not need to spend a fortune of branded shorts and shirts and some shops stock plain or unbranded clothing. Another item you should pay attention to is your hat don’t skimp on one try buying one with UV protection.

Sarel led the charge over the weekend with a nice catch of Tuna and Couta, Nick W and Action also took advantage of the weather and made some good catches of Couta and Tuna, several bats also operating out of Richards Bay caught Snoek. Closer to home I am not sure if anyone got game fish but Rock Robbers did report seeing what they thought was Snoek jumping behind the back line towards Glenton Reef. The few boats that went out managed a few Kob however young Mark caught 1 Slinger for his entire trip, a frustrating day on the sea for him. The mouth is still very shallow and the channel is narrow so be careful when going out and coming back in.