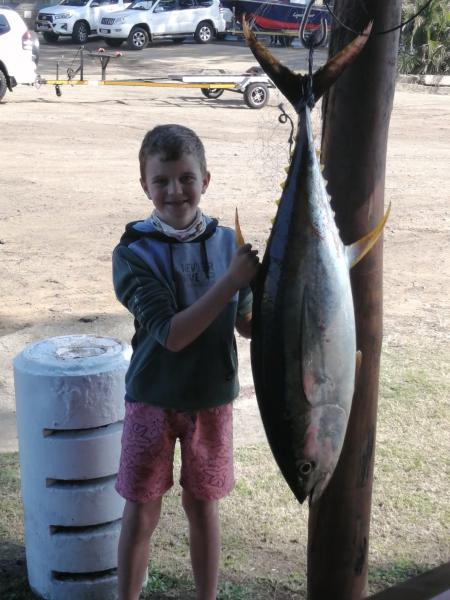 The weather for the week going into the weekend looks great for fishing as the predominant wind is going to be North with warm days, tomorrow is going to be a good launching day. The Barometer is still very high but each day it does have some drops or rises.

The water in the lagoon is still very clean and that is probably why Shad are still been caught every day. Some unusual sightings/ captures were a Zebra and Blacktail been caught and the large amounts of Sea Hares seen near the mouth. Species caught and some decent size ones were River Gurnard, Black tail, Shad, Toby, Zebra, Silago, Brassy Kingfish, Stumpie and Pickhandle Barracuda. Sardine seems to be the go to bait for the lagoon at the moment.

The beaches are still closed as per Government although people are fishing in other areas the Parks Board still has the beach closed, I am putting a proposal in today on how it is policed in other areas so let’s wait and see.

Fishing was slow for some over the weekend and the spots were not producing as much as we would have licked however Barry got a Garrick at the mouth and he waited the whole day for it, Rudi and Wolfgang got a decent size Shad and Long Michael got a nice size Diamond of 68.67kg these were caught at the mouth yesterday, Wolfgang got his Shad on Saturday in the Lucky Dip area I have also heard during the night nice size Kob were caught in the same area. Rudi’s Shad was caught on a Chokka Sard combo and this judging by bait sales seems to be the most common bait been used. At long last we will have a friendly surf size to fish this whole week.

Peter De Kok took his son J.D. for his first deep sea fishing trip and what a trip it turned out to be, after landing a 5kg YFT it was J.D. up next and as luck would have it his reel screamed and he was game on and it was a proper fish taking line with him holding the rod with both hands battling away at getting on top of the fish, the fish came to the boat twice and great care was had keeping it away from the motors it was only after he got it to the boat for the third time Boela could gaff it, it was a 20.5kg YFT well done young man, the fish was caught on a deep diving Rapala North of Richards Bay. Two other local boats went north one to the 100m mark passed the Jolly Rabino and managed a small Amberjack, Nanook hung around the Dawson’s area and also got a Tuna of around 15kg. On Saturday Nanook managed 2 Couta and a baby Marlin on a Couta trace which  after a tough little fight and a jump or two they got it to the boat and unhooked it and when it was properly revived they let it go. Closer to home the fishing was also slow with Shaun on Legal Duck bottoms were very slow , although he got some it was not easy, Louis reports he caught big Kob, Big Rockcod descent size Slinger and a big Soldier.