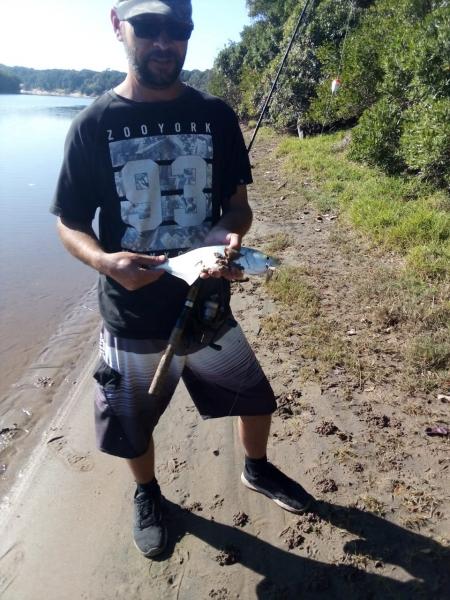 Weather going forward into the weekend is looking good for fishing throughout the weekend as is the surf conditions are under 2m and the colour is great.

Shad are still in the lagoon in the main car park area, they are feeding off the bottom and from floated bait, I was down there just now and saw two been caught 1 buy young Michael of about 40cm and young Lous got one of 37cm both were caught with Sard Fillets, no other species were caught not even Grunter, we saw shoals of Mullet swimming by as well as River Bream , the Bream were eating the chum but not bait on the hooks not even Prawn bait could tempt them. Shad fishing in the estuary is a must over the weekend and on light tackle they give a good box. The water in the lagoon but its standards is clean and this might be the reason the Shad is hanging around.

The beaches are still closed to fishing, we think they might open in level 2 at best or level 1. This is a government directive and not a Parks Board directive they are merely enforcing the law as they are required to. Parks are now open for exercise so maybe the beaches will be next.

The surf is down and looking good there is colour in the water but it is not brown  as it has been of late, fish to target over the weekend must be big Shad 2kg plus ones and Kob into the evening and during the night, the tides are not working in our favour being high tide in the middle of the day but Garrick don’t seem to mind that and targeting them with live bait late afternoon will produce results, the best place to catch these species without moving spots will be Port Dunford. There are Spinner sharks in the surf zone and I am particularly interested in photos of the tummies so I can see if they have an umbilical scare or not so I can forward them onto a research project. Bait you must have is Chokka, Sard and live bait if you can get it.

Game on sea has settled time to fish and there is good barometer movement although tomorrow has a high of 1028 in the morning it drops to 1018 during the day, fish are supposedly more active on a dropping barometer, the surf is small however early morning launches through the mouth might be tricky, so the surf might be an option or a very early launch coming back at lunch time. The mouth area from reports during the week is that it is quiet shallow be careful.