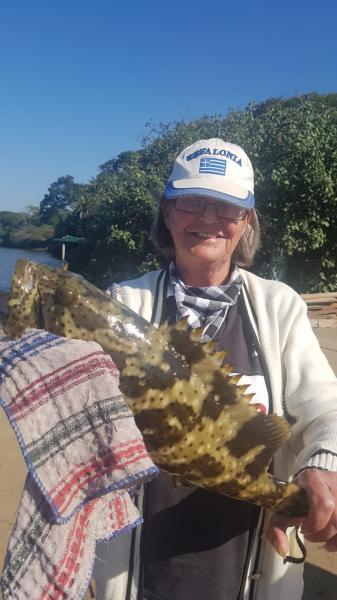 Today is nice and hot with little wind the swell is down however from tomorrow it turns for the worst and we expect the side wash to come back, it is almost as though the windy season is back.

The lagoon has been on form this week with some decent size fish been caught and this could be because the prawns are in the river and decent size ones, they seem to be here a bit early. Species caught so far; Malabar Rockcod, Shad (on more than one occasion) River Bream, River Goby, Spotted Grunter, Tiger Fish, Giant Mud Crab and Eels. Seen as the sea will be a bit rough maybe targeting some of these over the weekend will be the way to go.

The beaches are still closed to fishing, we think they might open in level 2 at best or level 1. Today and maybe tomorrow morning will be about the only opportunities to fish over the weekend, on Wednesday evening when the conditions weren’t that great a nice size Kob was landed so they are still about. We were talking about wading The Banks the other day and the dangers that go with it, it is a very dangerous place to fish as the gully between the shore and the banks at particular times during the tide cycle has a strong current and height impaired people like myself can and do get swept in the gully, this current is when waves break over the banks and the water needs to go back to sea so the water runs down the gully to the gap between the banks and goes out there causing what we call a rip current. Try not wade there by yourself and try not wade in water above your hips so when a wave does come over you can still stand although the wade it not a long one the force of the current will catch you out as has happened to me and I got dragged along in the current which felt like for ever, when this happens use you rod as a anchor so when the  water passes you can stand again and climb out as soon as possible not onto the bank but onto the beach, this should serve as a signal that your time of fishing on the banks is over as coming back will be harder. I will carry on talking about The Banks in the next report.

Boela went out this morning and he was probably the only one, it seems a good call as the wind has not really picked up and it is a nice hot day. There may be a chance for a quick trip tomorrow morning if the North wind blows all day but from tomorrow afternoon the surf just gets bigger through till early next week. Not much has happened over the last week however we did spot a big school of possible Red Eye Sardines behind the back line on Tuesday there were some birds following them, Jannie was tempted to go have a look but the sea was up and would probably not have been able to launch.