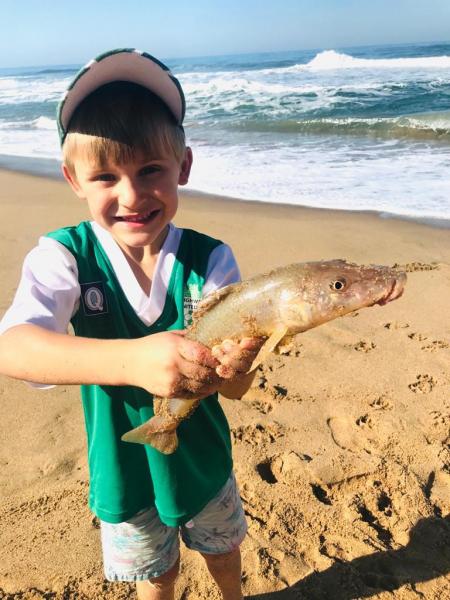 Today and tomorrow we have dropping barometers with Sunday a rising one,, for the guys that like fishing using barometers as a guide for fishing we have a good weekend coming up. The temperatures over the weekend are ok at around 22.

During the week a gill net was pulled and it had a dead baby Honeycomb Ray in it, this is unusual for this time of year as they are normally a summer visitor and great fun to catch on light tackle, this one was about 5kg. Reports of Shad right up river passed the bridges have been reported so why not try big fleshy baits to try catch one. Reports of big i.e. around 1kg of River Bream have been heard again great fighters on light tackle and these guys take any bait presented and can be found anywhere along the lagoon, they tend to feed along the side on the river bank but so do small Grunters and Stumpies be patient. Good news now is you can stay in the park till 5pm but cannot enter after 3 pm.

The main beach is still closed to fishing and it will only open when all beaches are fully open as it stands now you cannot walk across the beach to get to the water’s edge. Fishing has been slow this week in most of the “local spots” however Port Dunford seems to be the place to be as very nice size Shad have been caught together with some Garrick. There are reports of an angler getting broken twice in one session, we assume this to be a shark as he could not land it using tackle for edibles. There are a lot of Barbel been caught at night and we normally expect Kob to be with them but this does not seem the case, we think with high tide been later in the evening over the weekend this might change, Shad fillets are very good bait for Kob if you cannot get mullet. At a few places mullet have been seen in the surf so take your net along. Frank Verbaan managed to catch a very decent size Silago much to the amazement of the other anglers as we are used to catching small ones, they are good for bait, I have visions of the little guy running down the beach chased by anglers trying to prize the fish off  him.

After all the action over the weekend there were high hopes this would continue into the week but alas this was not how it turned our, much like the surf fishing boat fishing was very slow with some guys not even catching a fish on one trip during the week. While the sea looks “flat” over the weekend I think with the wind it might be a bit choppy, as they say nothing ventured nothing gained.