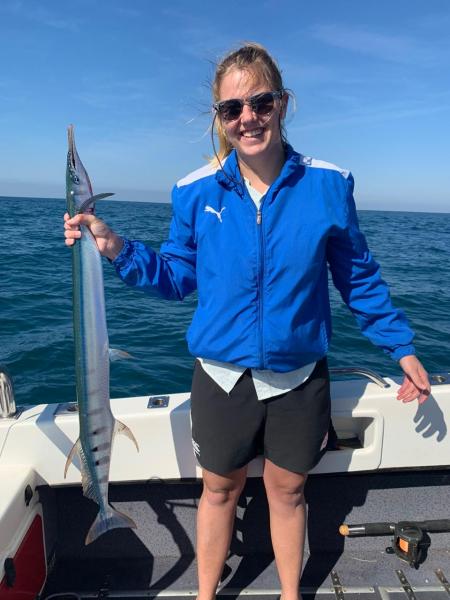 Looking ahead into the week we have very good fishing weather with swell at about 1.5m and North winds blowing, Wednesday and Thursday will see a max temp of 25.

The Lagoon is full of juvenile fish still as they over winter in the Estuarine system and we cannot wait till we can fish into the night, currently we can stay in the park till 5pm but not enter after 3pm and we look forward to the times going back to 10pm closure so we can get some big Kob and the big Grunter towards the end of winter. Slow trawling is working well so I think retrieving a lure from the side should be a slow retrieve as opposed to cranking the lute in very fast. Please continue to report any gill netting activity so we can deploy teams to take the nets out.

The main beach is still closed to fishing and it will only open when all beaches are fully open as it stands now you cannot walk across the beach to get to the water’s edge. The weekend saw some nice fish being caught at various spots including 3 decent size rockcod however the big Kob were elusive, there are nice catches of big shad to be had. Garrick at Port Dunford were caught over the weekend so that seems to be the hot spot at the moment, like mullet or shad (if you can get the 30-35cm ones) are the preferred bait. The tides are getting better for evening fishing which means we should see the Kob coming over the sand banks. Another big catch was the amount of bakkies caught driving on the beach as well as a vehicle been confiscated according to eye witnesses as they saw it following the parks board down the beach, when will people learn, we can expect more anti vehicle patrols taking place do to the amount of people ignoring the law especially in a MPA.

At last the ski boats were allowed to launch for the first time in months and the guys had a great time at sea. 2 chaps fell of their jet skis while fishing, another jet covered his mate who was behind him with sand when they it a sand bank and so there group of them had a good laugh , oh and another guy in the same group got his finger stuck in a small sharks mouth, we can write this off as being rusty. Some nice size bottoms were caught close in but no game fish were caught in the bay however further out Nanook had a very good weekend with Tuna, Couta , Wahoo as well is a very nice size Gar fish been caught by Cheron de Waal. The Kob and Slinger were nice and big several  Kob weighed around 5k, the Rockcod are congregating on some reefs as it is there breeding season and are one a a few species that change sex, if the swim bladder has not popped do this for king and country and let them go.