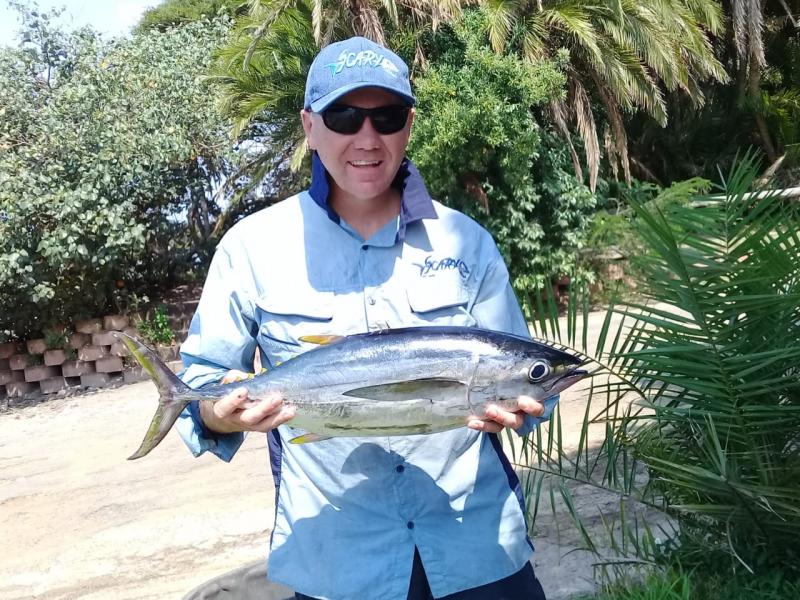 The lagoon water is much cleaner than it has been for a while and the last night we had some rain however so far it has not discoloured the water. Some good catches of River bream, Malabar Rockcod and Brassy Kingfish were made over the weekend. A fair size Pike Conger eel was landed near the slipway they make good eating and are a delicacy in the Far East. Artificial Lures seen to be the main bait the fish were attracted to and slow trawl seemed to work well as you can cover more water.

On Friday the water colour was great for fishing and everybody was excited about the common venue been fished by Zululand club was going to produce a great deal of fish but behold and low the Anglers arriving at The Banks and the Main Beach areas were met with blue water and fishing was tough and slow with no Diamonds caught during the day. Saturday night saw 12 Diamonds caught by a club from Durban. A drone dropped into the sea on Saturday morning in front of Doggy Beach and luckily a paddler 1.5km off the Main Beach say it and brought it back, Shane called me to say he had found a drone and I asked him to drop it at the shop and I would find the owner ,, I got hold of the guys fishing at Doggies and luckily one of them took the owners number and by 5pm the ever so grateful owner was reunited with his drone, big thanks to Shane for finding it and bringing it back as we know these things are very expensive. The drone angler was not fishing in the competition but privately. Fishing this week will be tough but should produce in spite and the wind as the sea is nice and dirty again.

Some good news is young Louis caught his first Tuna on Saturday following sound advice given to him be Pieter De Kok on Saturday night…….. But whatever they were deep in discussion with must have worked. Louis did mention he did not see much bird activity but decided to trawl anyway, he lost another fish when the split ring came of the lure, that one had teeth so maybe a Couta as the Lure was scuffed. Shaun got a nice Kob and a big Slinger seems as though the big Bottoms are still around, Merriman and his wife Michelle got a nice Cave Bass and Rockcod amongst their haul.

Next Monday the 23rd of March we will be holding a fishing clinic at the main car park at the lagoon as we will be less than 100 people we will not be breaking the law, we start a 1pm finishing at 4pm.