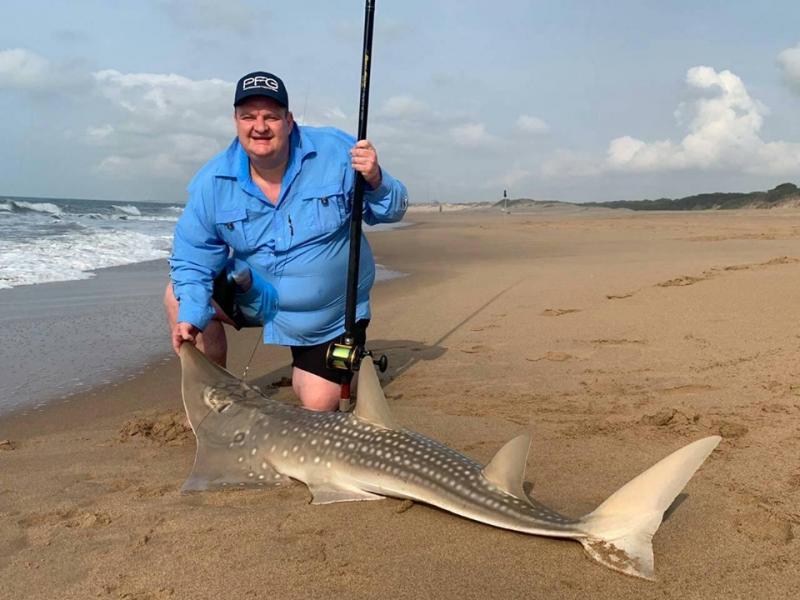 Be careful when fishing over the weekend as earlier in the week a Sea Snake was caught, the Anglers who caught it were so hasty to get rid of it they forgot to take a picture, these snakes are brightly colored when compared to Eels and do not have gills they are venomous however bites to people are rare, none the less we are far from hospital so cut the line and let it go, no need to panic as only one was caught, they do come into the estuaries occasionally but mostly inhabit shallow reefs, they are known to hang around in mangrove areas when they are in the estuarine system.

Crazy stuff but this week saw summer fish been caught namely, Baby Hammers, Diamonds and a Giant Guitar fish and the good news is Kob making size are been caught the hot spot seems to be Main Beach, Shangri La Beach and Mboyeni. Some other good news is I have 3 different size Mackerel in stock so you can drone, throw or slide. The Diamonds are still a bit small however it is normal for this time of year and they can only get bigger. Chris and his mate had a good session the other day landing 6 Diamonds, a Raggie of 135kg, a Zambie of 335kg and a Giant Guitar fish most were caught with a drone. Drone fishing is fun as it allows you to play and fish at the same time the bad bit is lumping it around. Alwyn and Pine were sitting calmly waiting for a bite when Alwyn’s rod went sharing the fight with Pine they both fought a fish for what felt like hrs by now they were tiered when Pine decided he would wade it and try pull the Giant Guitar fish out of the water as some of us have done , the Sandy took off with Pine hanging on and went through the shore break, Pine soon learnt that there is no short cut in landing these strong fighting fish as the fish was having none of it, the more Pine tried to pull him out the more he bossed Pine about, the other guys watching were rolling on the beach laughing, they did get it out and after a quick pic they released it without measuring it so according to hearsay it is estimated to be about 50kg ( this info I got from another angler unknown to them but was there.

This week an Old Women was caught, we have not seen one of these for a long time, another rare catch was a Trigger fish caught on the same boat, Snapper Kob are making their appearance on the shallow reefs and after the excitement at Richards Bay with catching Queen Mackerel we should see them on a shallow reefs soon. The guys were even catching Snoek off the beach at Richards Bay. If what is happening in the surf zone we might see the early arrival of Couta and Dorado, who knows.