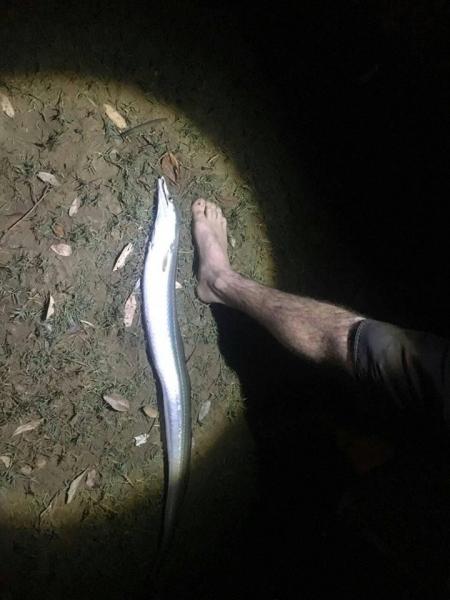 Will probably be the best place to fish of the weekend due to the front coming through from later today. Fishing has been slow with lots of small fish been caught, however a Pike Conger Eel was landed the other evening and gave a good account of itself (I stand to be corrected on the species name).

On Wednesday the ‘Wednesday club” had their outing at Shangri- La Beach and we took Artillery (Bait Blaster), Air force (Drone) and Infantry (casting) we had so many different types of bait and amongst all this fire power we landed one Diamond which was disappointing as on Tuesday evening a 14KG Garrick/Leervis had been landed about 1 km South of where we were fishing and we were expecting some good action, we had baits passed backline, at the back line, in the mid break and in the channel right in front of us, all the baits were coming back clean with no proper bites, me thinks the crabs were at it again.. The guys fishing on the South bank of the river mouth were the Garrick was landed also managed a Diamond, yesterday things did not get much better as from the 6 groups of guys fishing in different areas did not manage a decent fish between them. Probably the best edible catch this week was a Sole at Doggie beach. The hole at Shangri-La beach has moved North from where it was, main beach is very shallow from about 3 hrs to low and 3 hrs on the pushing while the Banks and Red Boom also have deep water, North of Doggies and 400m North also has a fishable hole.

The area in front of the mouth is sanding up however there is a narrow channel going through the sand bank, the Jet Ski’s a few months ago could launch at return at low tide but this is no longer the case and on Wednesday we saw a jet ski try come in but had to abort the effort and head for the main beach. The channels getting to the mouth have also got narrower. During the week some of the guys went out and apparently just like in the surf zone fishing was very slow, some fish were caught but mainly Slinger with very few Kob about on Wednesday however on Tuesday it was the opposite more Kob and nice size ones than anything else.


Next month’s social fishing get together is in the planning stages, we are working on an interesting format and we are sorting the final bits and bobs out.