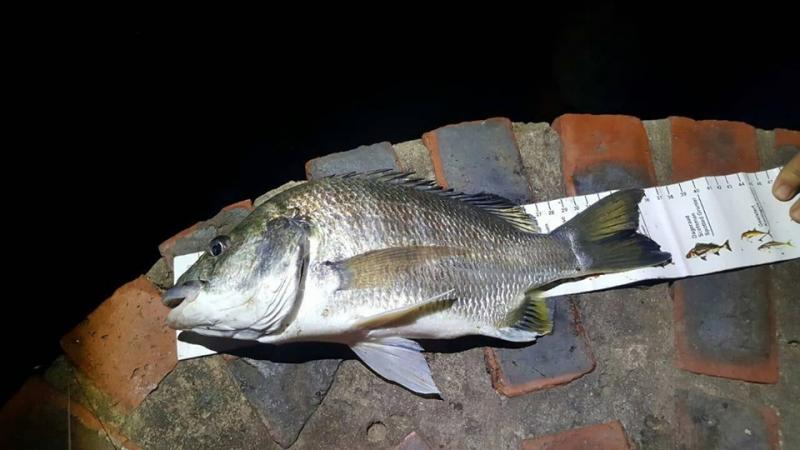 The water in the lagoon is the cleanest I have seen it in a long time and some nice catches have been made mainly at night and some very big fish lost, a massive Kob was lost during beaching of nearly 2m when the braid snapped, last night the same Angler bought out a mullet with the fishes gill racker attached to it, we suspect it was a big Kob that was gill hooked and the gill racker was still attached to the bait. Some nice Bream were caught over the 1 kg mark.

Looking at the barometer over the weekend looks like we in for a good weekend of fishing, we have 2 big climbs and 1 big drop. During the week several groups went Garrick fishing but with no luck as the Spinner Sharks were taking the live bait, a lot of big Shad were seen in the shore break but seemed not to be feeding as the guys bought the baits into the shore break and tried spoons and plugs but no luck. The Spinners are getting bigger and the big ones have started to jump when hooked, it is great fun catching these guys as the put up a nice little fight. On Sunday morning at 10 am there is a casting competition at the main beach, go along have a few casts and see what tips you can pick up, it is  a great place and environment to learn to get those extra few meters. When catching Spinner Sharks flatten the bard quiet a lot or totally, you won’t lose the fish and it makes unhooking it easier causing less damage to the fish.

It seems as though the sand bank on the South side of the river mouth has split from the beach and the sand has moved directly in front of the mouth making it very shallow so much so the jets skis yesterday were unable to launch by going straight out during low tide, the channel seems to be running South and is deep and wide however to get into it there is a narrow bank you need to get over, yesterday towards low tide we used the middle channel to cross from the stone wall to the beach.

Next events.
We are running a Spinner Shark competition on the 13 July fishing from 6am to 6 pm, you can fish for the whole 12 hours or for as long as you would like. Spinners feed around the banks and will take any fishy bait i.e. Sard, Mackerel and Bonnies etc. Entry fee is R15.00 per angler which goes towards the meat hamper to be handed out on Sunday morning at 10am.

The Honorary Officers  for the Siyayi Park are having a Golf Day on the 13th of July 2019  to do some fund raising to support the good work they do. At the shop we are collecting donations to hand in at the golf day, the money will be used to buy fuel for extra anti-poaching patrols your support will be gratefully received.