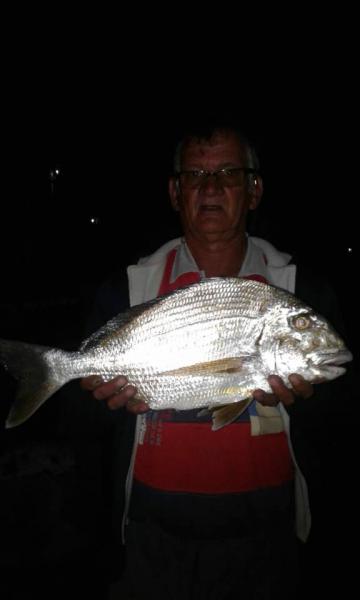 After the rain earlier in the week the river colour was like dark coffee, we have been adding milk at a rate of gallons per day and it has gradually got its colour back, with all the rain the water temperature has dropped and we expect a busy fishing weekend as the week has been rather quiet with no decent catches made.

Now the water has cooled somewhat we have seen some Diamonds been beached but very sporadic, it seems as though we had the “smash” starting earlier than normal ie in October the first ones started and then the momentum really kicked in during the back of November till the first week of Jan and since then just drips and drabs almost as though we are fishing for winter Diamonds and winter fish ie Big Shad and Big Kob. Last night after work 5 of us went for a throw and the water was the best it has been for over a week, wave action , working water  and good color, ( this bodes well for the weekend fishing) early on Gawie got a nice bus Shad and Ivan got bitten off by something, Martin dropped a big fish in front of his feet, Susan got stuck into a tiny shark so there was activity but we were struggling to get the fish to stick, there has been a tax man in the first channel and he popped up again last night and as in last Sunday night we could not entice him with a bait, it looks like he is enjoying live fish only. We think that we might get a good run after the next rains as this will coincide with most of the Diamonds leaving towards the end of Feb early March. Who Knows? We have quite a few visitors here for the weekend, the SAP angling club who came to say high while we were fishing, they fished Dunford yesterday and ended up with a few big Shad today they going to what we have nicknamed Gawie’s no 2 hole it is about 200m North of the Old Ramp as well as the “Warner Beach Gang” we bumped into them leaving the main beach as we arrived, good luck guys.

Spoon and Anchor sales were busing this week as there were 3 very good fishing days and the boats went out targeting mainly Natal Snoek with great success however the sharks also took this window and had a good time taxing the fish, a very big Tuna was hooked but unfortunately taxed conditions today are very good for the first part and some guys have launched early this morning hunting for Snoek (Queen Mackerel) and bottoms. Although the guys are not sharing the exact spots where the Snoek are we suspect they are been caught on the shallow reefs so check them out very early in the morning before venturing out to deeper waters. It is not long and the big Couta will make their appearance, lets us hope long before the Couta Classic.