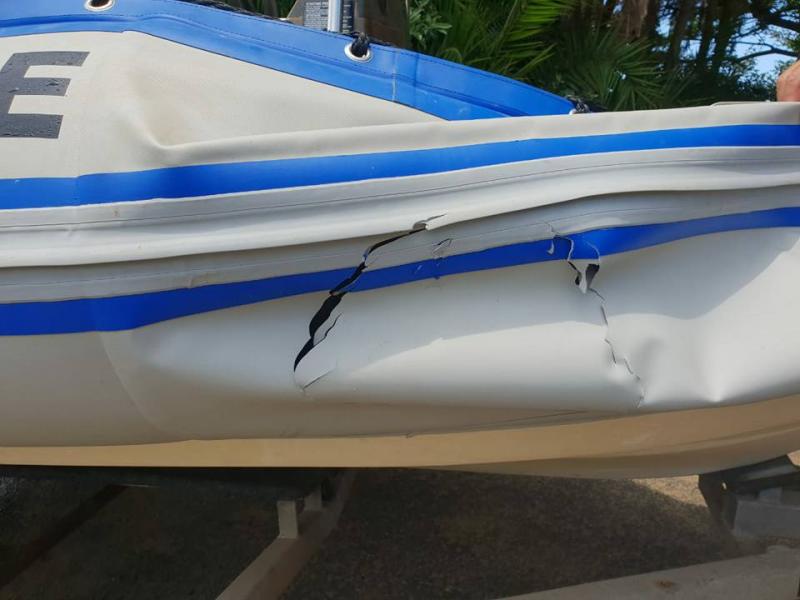 It seems the warm water has no effected the lagoon as there are no reports of many fish caught however with the rain fall we had last night might cool the water down especially if a lot fell inland , this will make the mouth area more productive again….we hope.

At last there was some action on the Banks on Friday night and Saturday morning, not sure what happened on Sunday. Some Diamonds and big Giant Guitar fish were landed as well as some decent size Shad, due to the warm water fishing was slow over the weekend, the hope the NE would blow cold water in did not materialize let’s hope the South blowing this week will do that. Warm water makes the fish lazy. Yesterday Mtunzini main beach was very quiet as was Doggies, I did send some guys to Port Dunford but I have not heard back from them.

On Saturday morning Stephan had the misfortune of having his pontoon bittern by quiet a big White Shark the bite width was 47cm and the bite height was 30cm. This is version of events. “We were sitting fishing of the same side of the boat when we saw a big fin coming past, we had seen Zambies before and thought nothing would come of it. Then my phone rang and as I answered it I felt the boat shake and drooped my phone on the deck by the time I retrieved my phone it was gone, the shark must have circled the boat and attacked for behind us. I told my son to forget the anchor just cut the rope and let’s get out of here, when we were approaching the mouth I went to check my fuel when the engine flooded and we could not restart it for about 45min then we got going again and came through the mouth”. Meanwhile we received a call that Stephan had his boat attacked by a Shark. Cut his anchor rope and is now drifting. We called Shaun as we thought he was out but he had not left but would assist and we also phoned the NSRI to alert them of the fact we may require assistance, the NSRI was then in direct contact with Shaun so he could report as to what was going on when he arrived on the scene. In the meanwhile here is us thinking the NSRI were sitting at their base waiting for word from Shaun but no they scrambled the crew and set off as soon as the crew arrived the set off towards the Mtunzini bay and were near the light house when they were told to stand down and return to base. (I spoke to Richard about why they did that and he said it was procedure as staying at the base would delay assistance, this makes sense. When I asked him if the crew were cross because they had wasted their time his reply was “Hell no” they were pleased Stephan was back safely, the NSRI then headed back to the harbor and seeing they were out decided to do some training (as if they don’t train enough) and put the time to good use, while they were busy they were called to attend an incident where there skills were need and they arrived on the scene in record time. Chaps these guys are volunteers and rely on donations to keep the station going, I have a monthly debit order going and we collect money in the shop for them, I urge you to try do the same. They do not only assist with ski boat or ocean vessel rescue they also help marshal event like the Duzi, they do inland rescue work and work closely with the SAP water wing. They did install some live saving aids on the beach only to have it stolen.

Why did the shark bite the boat?

This is one of the theories banded about that makes the most sense to me.

The Great White is the only shark that can feed above the water as can be seen on documentaries of Whites feeding on Whales. I am not saying this is what happened in this case but fisherman fishing bottoms off Ducks often cut bait on the pontoons then splash the remains off with sea water when they move off, hence the nickname “Splash and Dash fishermen” however while fishing blood drips into the water either off the pontoon or goes out through the scuppers now we know a shark can smell blood in about 1 part per million so the shark comes along the blood trail, sees a thing that looks like a whale and takes a bite out of it, the most fat looking bit to him is the pontoon above the water and voila you have a punctured pontoon. I think rubber ducks look more whale like in shape than rigid boats and that is why they are more prone to been bittern, I think the word “attack” it too aggressive as if he want to attack a boat he is capable of ripping it to shreds.

By the way Stephan and Shaun managed to boat some very nice bottoms , mean while Nanook went out further to the 2oom mark and got some very nice size Dorado the previous weekend they got a small Marlin and a Sail fish on live bait at Dawsons.