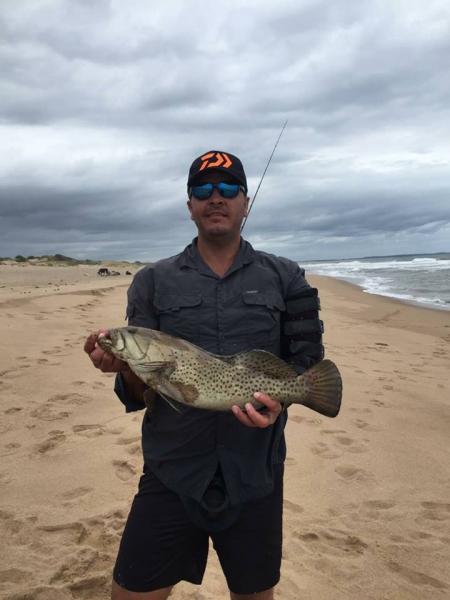 Yesterday an Angler reported the whereabouts of 2 poaching boats, the parks board reacted immediately to the information and the boats were recovered. They were checking licences at the lagoon yesterday, they still have jurisdiction at the lagoon but not the beach, and we have to rely on good old DAFF to do this. Yesterday it was like a River Bream Smash at the lagoon with reports coming in of that been the most common species of fish caught. Remember the King Fish are very active this time of year as well as the Pickhandle Barracuda. The smallest fish reported been caught was a Thorn Fish “not much bigger than the bait”. The River Bream were so active they were biting chucks of the live bait, they always seem to miss the hook and bite the fish off at the opposite side.

After all the rain from Friday night till Sunday morning the weather settled to allow for a good day fishing yesterday, young Michael headed for the Banks to do some scratching and was rewarded with a nice Catface Rockcod, a big Shad and some small sharks, these little fellas were also down at the main beach and so were Kob but just not making size. There was someone droning and by the time my informant left the beach they had not hooked into anything bigger than what was been caught on throw bait, I hope there luck changed. Look at the weather forecast for this week, Wednesday and Thursday are going to be good days for Diamonds and swim bait. Places to fish will be the hole to the North of the Old Ramp and the Port Dunford stretch although the Banks have been quiet one should not discount that area.

Kevin and Nic took a gamble that the break in the weather would hold and it did, they went out and reports are the conditions were good, clean water and millions of Sprats all over the place and this could be why they could not entice game fish to the hook. Good catches of Morph Grunter and Squaretail Kob were made. Well done chaps.

Next events. We have an 8 sleeper house (can sleep 10 as it has 2 double beds) should a group want to hire it, it is self-catering with ample bait storage space.