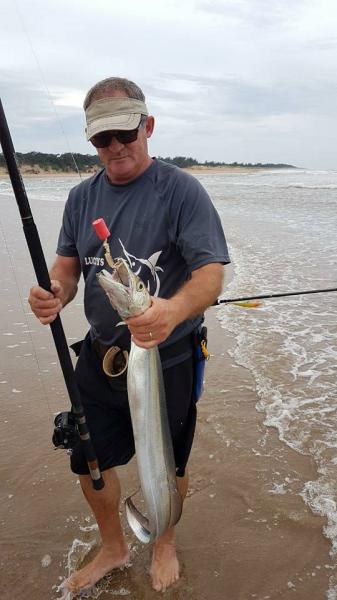 Young Bryce managed 4 Honey Comb Rays on the Sand Bank next to the Slipway, these youngsters of between 3 and 5 kg often venture into the lagoon to feed during the summer and probably hide from predators. One of them had a line inside its throat so it had been caught before. Another interesting catch this week was a very big Walla Walla in the mouth, there is a debate about whether or not it is a Pike Conger however the majority has gone with a Walla Walla or Ribbon fish. The lagoon is full of juvenile fish which is a good sign that we have a healthy estuarine system, I have been told it is the 4th most important estuarine system left in SA in the main due to pollution, this is kind of sad as there are bigger systems in SA that should knock the Umlalazi estuary back a good few pegs.

It has been very slow fishing in the sea, yes catches are been made but not in great numbers and to go for an hr without a sniff is not uncommon, why one has to ask as the run up to Christmas fishing was great, this is my theory based on what is going on fishing wise onthe East Coast. For this time of year the Sea temperatures in the surf zone is very cold it should be in the mid to low 20’s but some days it is below 20. There have been some very nice fish caught after all fish must eat but in cold water been cold blooded animals they eat less frequently. There have also been strange encounters like the Dorado in Nahoon lagoon, live Squid in the rock pools on the KZN South coast and we catching Walla Walla in the surf on the main beach.

Some guys went out yesterday and came back with nothing, they were after game fish and where ever they went they found green water with no bird activity and they also made the observation the sea was very cold for this time of year.