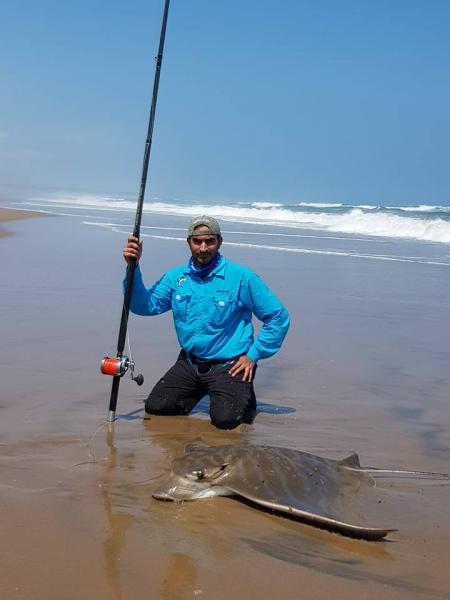 A River Bream was caught and had no tail the wound was completely healed the angler released it, we think it was tailed by a Shad as opposed to an Angler cutting it off, we would like a picture of the fish so if anyone catches it and sends a picture you can win a spool of line. The lagoon is fishing well with some nice River Snapper, River Bream, Pickhandle Barracuda to name a few and one angler has only managed to catch River Gurnards and is convinced there are no other species in the lagoon. The mouth area is still producing big diamonds when fishing there try flatten your barbs as you stand a very good chance of getting broken off and the fish can spit the hook out quicker.

Although fishing has been slow for the last few days mainly because of the clean water and cold sea there have been some good catches been made as well as some smash ups. The SW that is blowing now should bring warmer water in and add some colour making tomorrow and Sunday better fishing days. We have been asked by several visitors “Why do you Natal guys fish so close together?” another question asked is, Why when a guy is on a fish you guys come and cast near the angler?” The answer is because we stupid and rude hahahaha no seriously Firstly the more baits in the water close together acts a bit like chumming, this increases someone in the groups chance of a hookup, secondly we can stand and chat after all we are social creatures. The third reason is Diamonds come into the surf zone in Shoals so when the guys see someone on they run and caste in the area, this allows them to get a hookup, I imagine the club anglers would like to use that tactic as points are important to the team and individual. These are theories shared by many. Remember the angler with a fish on has right of way so please assist where you can even retrieving your bait if need be.

Yesterday was great fun listening to the reports of fish that were caught and where, first in was an 18.45 kg (ORI) Giant Trevally caught behind the Wreck while another boat lost something that screamed off, it peeled 80lg braid off the reel before they could get the boat going to chase after it, maybe it was another GT. A while later a 10.45 Square Tail Kob was boated, this for its breed is a very good catch as they reach a weight of about 12kg. There are also reports about Natal Snoek been caught. Other notable catches were of a 4kg Yellow Belly Rockcod and a Slinger of 2.14 kg. Wit Oliphant boated the Kob, Slinger and Yellow Belly. For the guys who do not know the river mouth plot your way out and come back in on the same line to avoid hitting the sandbanks or follow someone who knows the channel in. Those sand banks are an accident looking for a place to happen.