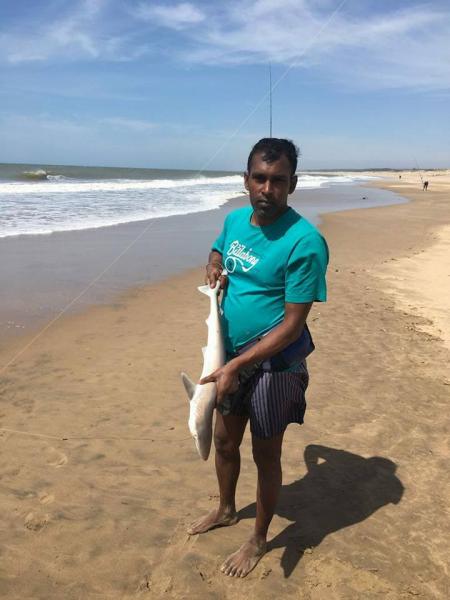 Rather hit and miss for some while others reported good caches of River Bream ie over 1kg specimens, I saw a picture of 5 on one boat. River Snapper and Diamonds were also boated together with the odd Pickhandle Barracuda. Most of the fish were caught on Sard, Prawn and live bait. Most of the action was happening towards the N2 and mouth area while the car park area was very quiet. Some guys were spending the weekend here and fishing in the lagoon when one of the youngsters got his foot cut by something in the water, please be careful and when shoes when wading or playing in the lagoon, unfortunately glass and other sharp objects have found their way into the water, particularly in the public areas.

Diamonds Shad and Snapper Kob were the most targeted or caught fish however in between lots of little Spinner, Black Tip and Hammer Head Sharks were keeping anglers busy, I Quote one of my informers” Shot for Shot the guys up and down the beach were into something”, this was both Saturday and Sunday morning, some guys were throwing fish back as they had enough, Port Dunford and Amatikulu were the same let’s hope the fish stick around till Christmas. Some of my informants who were up for the weekend flew some Snapper Kob out as live bait with a drone, both were taxed behind the head, the debate is whether they should have used 2 hooks or 1. They managed several species of fish over both days.

Nanook went out over the weekend to High Point and on the way managed to get 2 Dorado of about 8kg some other boats launched in the bay but at the time of going to press we have had no feedback.