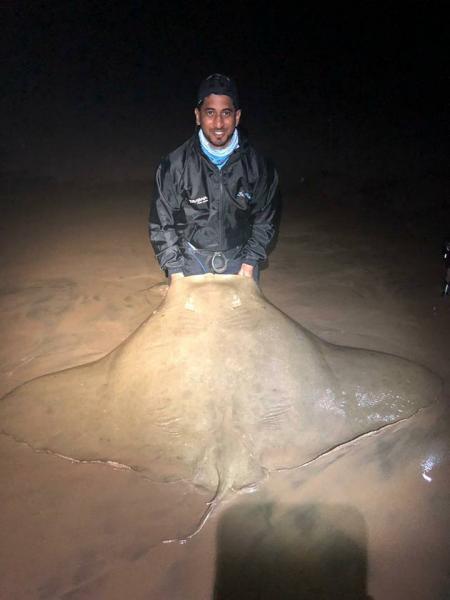 Stripped reels and broken rods culprits ….Diamond Rays and big ones, I quote “ it was a bit like taking to tooth pick to a gun fight”. Unfortunately although we fish with light tackle on the river the diamonds don’t realize that and will take a small bait however if you are using live bait particularly at this time of year factor them in and try fish a bit heavies that normal. One of my informants related an experience he had after hooking up a diamond before the stone wall it took off over the sand bank and out to sea as if nothing was happening, luckily when he got to the mouth he could beach his boat and secure it with the anchor before running along the back after the Diamond, he could not turn in and the line parted. Some reports were made of Kob been caught but we are awaiting more details.

Firstly to the Anglers who had been fishing in a vicinity of where the shark was found with is head cut off thank you for taking time out to contact us and clarify you had no involvement with the incident. The above mention shark could have washed up on our beach after the big wind we had on Saturday having been caught further South and we suspect the anglers cut off its head and disposed of the carcass in the water thinking other sharks would eat it and it will be all good. Whilst removing a Sharks head is not illegal as you are allowed to keep one per day don’t waste the carcass, eat it or give it to someone who will. Years ago up until the early 80”s this was the “done” thing almost like a buck trophy but the public rebelled against his much in the same way as competition anglers used to pile fish up on the beach this pressure made the sport revisit the way competitions were done and I believe this led to the measurement system currently in place, it was around this time bag limits were being introduced and the practice of cutting off shark heads was frowned upon as it is today. Enough on that. Fishing over the weekend was very good as can be attested by our informants and the amount of people fishing at Port Dunford, there are good reports of nice size Snapper and Shad been landed (  Please still closed season for 11 days please put them back. We all know by Dec 1 the Shad vanish hahahaha) on the non ed side some good catches of Guitar Fish and flatties are been made. Hang in there.

Yesterday saw 3 boats and 2 water motor bikes the bikes left early and we back early as the conditions started to worsen, the boats left after 9 to take advantage of the tides which enabled them to launch and return in the mouth. Not a lot of fish were caught by some of the guys whilst others had more luck, something encouraging was the amount of undersize Rockcod been caught because it shows there is a healthy population of them in the bay. Main species of fish caught were Squaretail Kob Slinger and a lot of Snapper Kob. One tagged Kob was boated and we are awaiting the results from ORI. Whilst the water colour was good the temperature was a bit too low for game fish varying between 21-22 deg. There was some bird activity as in them flying along and boing some hovering but no diving.

We are expecting our summer order in tomorrow, we have bought in some new lines. Kingfisher have bought out their new catalogue with some very exciting new ranges and changes to some of the old, pop in and let us know what you want us to stock.