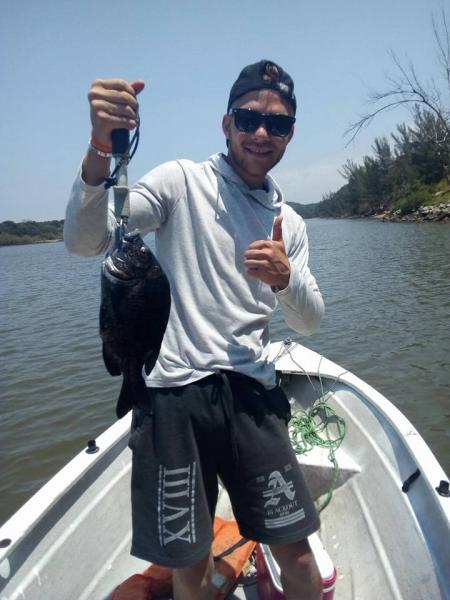 NE gusting 29 then stars dropping to 19 by the late afternoon then a SW buster comes through at around 5pm gusting 38. Sunning at first max temp 37. Wave height 2.5 period 8 barometer 1001 –dropping to 995 just before the buster then rises to 1005.

SW 18 dropping during the morning to 10kts rain forecast I the afternoon with a max of 17. Wave height 2.6 -2.2 period 9 with a reasonably settled barometer at 1012

River bream galore and a lot of the making size however it was not then that stole the show but Diamonds, young Zak nearly lost his rod as one took off with his bait, he had to run into the water to retrieve his rod and I Quote “Where does this thing think it is going? Durban” after a fight lasting well over a hr he lost it, another angler lost another near the mouth, for some reason at the start of the summer the big Diamonds come into the lagoon and hang around for some time. Young Ryan was extremely lucky to land a size River Bream as it had nearly straightened his hook looking at the picture it is a very dark specimen and had big teeth, could this be a very old one?. It is still swing about so look out for it. River Snapper catches are increasing mainly at the mouth and the area of the Steel Bridge going inland along the rocks. The most successful baits used were live Mullet and Glassies, our informants tell us that artificials were not very successful but hey that is how the Lagoon rolls.

There was a 3 day gap in the weather and the Anglers took advantage of it. Some Raggies and Diamonds came out at the banks and a lot of Edibles were caught on the main beach. There were some bust ups on cable to make things more exciting, I believe there were some nice Kob caught in the Dunford area  together with small Sharks. It is safe to summer fishing has arrived when the Snapper Kob and baby Hammer head Sharks are here it is a dead giveaway. Unfortunately amongst all the activity in the surf the Shad are often first to the bait only 32 days to go before you may keep these or use them for bait. Over at Amatikulu an Angler opened his flat fish account for the summer with a 40kg Diamond and a 43kg Honeycomb Ray.

Saturday morning saw a lot of boats launching as conditions we good with a SW forecast later in a day meaning an early morning launch and heading south was the best tactic to take advantage of the wind when it came up. Good catches of Bottoms was made the main Species were Squaretail Kob however while Janie was tied up alongside Wit Oliphant he caught 3 big Javelin Grunter, biggest was 5,6kg, the crew on Wit Oliphant could only watch in disbelieve as all they were catching were Kob however later in the day they did manage to boat a very nice size Soldier one of which has not been seen for a long time. Nanook headed out further and managed a few Dorado. The water temperature has climb to nearly 24deg so it is not long before we see the boats catching Pelagius. Just when we thought the whales had gone some were sighted in the bay however Fire Fly who was fishing at Sodwana Bay last week reports there are still stacks of them coming down so we must still be careful and on the lookout for them.