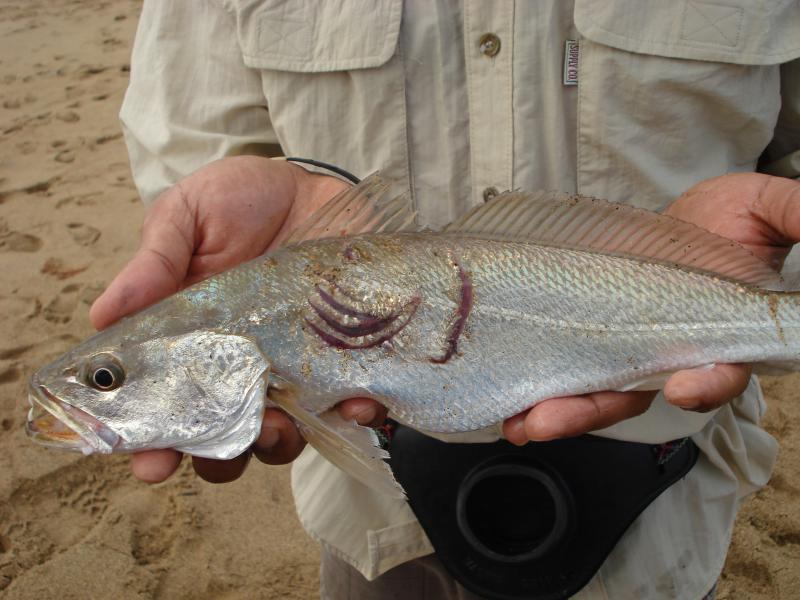 On Saturday we held or First Fishing Clinic for 2 ours we had 16 kids of various ages fishing and  all caught fish. Species: Spotted Grunter, Javelin Grunter, River Bream, Soapie, Glassy, Cape Moony, Cape Stump nose and a small sprat of sorts. Further upstream passed the Steel Bridge some River Snapper were caught on live bait. At the steel bridge itself mostly River bream were caught. Stone wall area produce baby kingies and some Pickhandle Barracuda.

A very nice Java Shark of 99kg was landed at Port Durnford while in front of the Siyayi was a hot spot for Edibles , Doggies and old ramp produced mainly non eds with one nice Shad (50cm) plus been Landed. Sunday morning was the best time to fish and in one case a group of guys ran out of bait by about 9 am and shot up to the shop to get 2 more boxes of Sards. A group of guys went cancelled their trip to Red Boom and went North instead and one Angler landed 2 Giant Guitar fish on whole chokka. Was hoping to upload the picture today but not received it yet.

Both Saturday and Sunday were good surf conditions to launch and quite a few guys took advantage and went out. Fishing was slow and no game fish were caught amongst the bottoms was a big Dusky Kob of 8kg. Sunday was much the same with no bird activity so most of the guys fished for bottoms and one boat was rewarded with a large Square Tail Kob of 7.8kg. Sunday was a slow day and though there were lots of “showings “ the fish seem to have been full or off the bite.