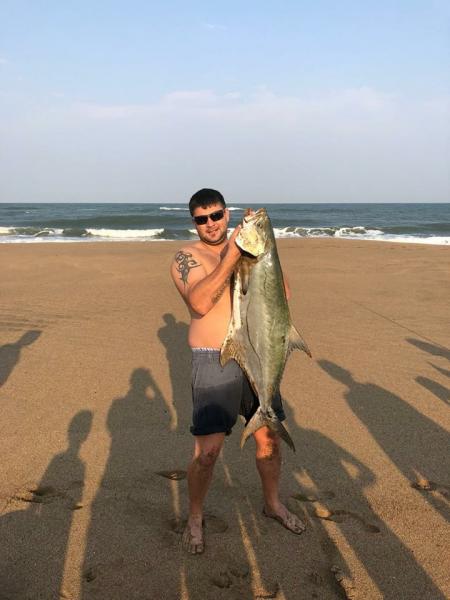 NE gusting 9 Knots swinging to an E by late morning gusting 3 before the SW comes through in the afternoon gusting 9. Partly cloudy with a max of 27. Wave height 1.7 period 7, barometer 1010 for most of the day.

NE gusting 8 first thing then gradually picking up throughout the day gusting 32kts by late afternoon. Partly cloudy with a max of 33. Wave height 1.6 rising to 2 period 8 barometer 1009-1001.

Okay now here is a story and if I had not heard it from 2 of my informants I would have asked them what they are smoking……… 4 Queen Mackerel (Natal Snoek) were caught in the lagoon in one session, now we know they go into the harbor at Richards Bay so why not into the lagoon, we have had very high tides over the last week or so and this could have caused them to venture into the lagoon. River Snappers are still very active in the lagoon and a bus of one was dropped on landing at the main car park, the Kob have ventured into the lagoon again but no sign of Shad. A rule of thumb in the lagoon if you want to catch big fish use big bait and at least a 1/0 hook. Live bait is king i.e. Glassies, Mullet, Prawns etc.

The big Shad have popped up again after been of the bite for a while and so have the Garrick, a nice one was landed early in the week caught on Red Eye Sard. The small Shad made a brief appearance which caused great excitement as they make a great live bait for Garrick and Kob and then just like that they vanished the Garrick probably got to them before we did. On Wednesday night a local Angler using his drone for the first time got a PB Ragged Tooth Shark of 113kg whilst not fishing for points he shared the fight with his mates and after landing it took a quick pic and released it in record time, this was at Port Dunford.  When handling a Raggie please remember they might look fat but they are incredibly agile being one of the few sharks that can bite its tail, many years ago while fishing at Fish River mouth an angler lost his calf after been bitten by a Raggie while it was on the beach and they were trying to weigh it.

Yesterday some guys launched and headed North fishing from the wreck area towards the light house, while the wind was up they were catching some bottoms , mainly Slinger and the wind dropped and the sea went flat and so did the fishing. They did not see any bird activity so they never tried for Snoek , eventually they gave up and returned , a Jet Ski went as far as New Mouth and they also did not fare any better it still likes like the SE section of the bay is fishing the best ( here is the first tip for those fishing the comp).