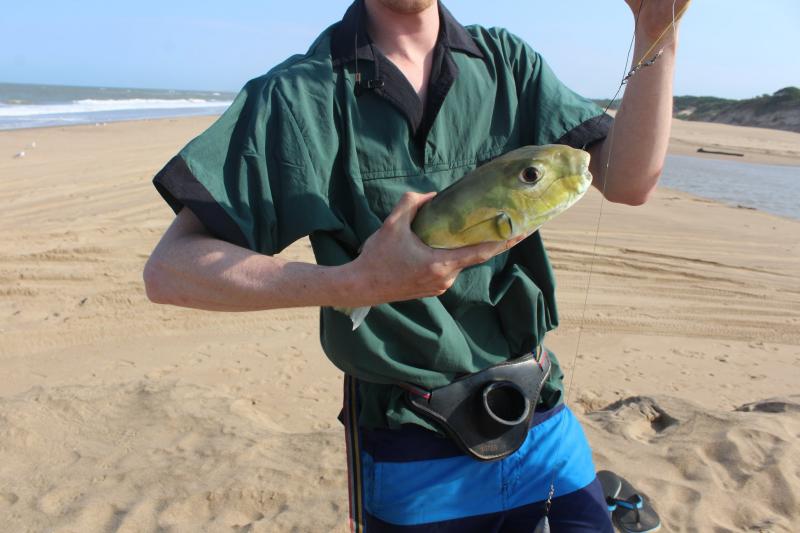 Probably the best place to fish for the early part of the week till the sea settles as we approach the weekend. It seems to have gone quiet on the Malabar Rockcod front however Diamonds, Browns and little Honeys are bending rods and the Shad are still there. In the aea from the Steel Bridge going inland is a monster fish, the guys fishing on the North bank tell me it is a fish and not a Crocodile or flat fish, they were in the shop buying 36kg line that we buy for deep sea bottom fishing, these guys know there fishing as they have been fishing that stretch for years. Here is the challenge, go catch it take a pic and you can win a spool of line. Anything under 50kg does not count……..

Was very slow going over the weekend with mainly Milkies been caught but not as many as the week before, there was a side wash to contend with and that makes fishing tough. Port Dunford was by far the most active area. During the week some are coming fishing and will be launching their baits with a tube, this sounds interesting and I am going to try join them for an outing and see how they get on. Any Ski Boats in the bay will be advised to wear their helmets at all times.

With the conditions as they were and going forward to the week, the best place to fish would be in Richards Bay harbor with the channel between Pelican and Naval Island being a hot spot. While my informant was observing the activity from the Island he managed to hook into a fair size Kingfish only to drop it during preparation to land it. The boats seem to be using Razor Bellies as live bait and were targeting Garrick.