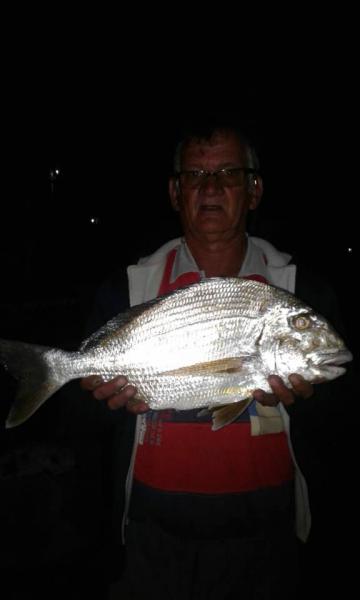 N first thing gusting 4 kts swinging to an E later in the day gusting 5. Sunny skies with a max temp of 27. Wave height 1.2.

The lagoon fished very well as expected over the weekend especially the area around the mouth back to the stone wall and again at the main car park and Steele Bridge, a guy came into the shop to by thicker line as he had been bust off at the Steele Bridge and the area on the North Bank where the rocks are, they have no Idea what was busting them off and the line they were using was 13kg which is heavy for river fishing. A small Brindle Bass was landed and immediately released, sorry there was not time to take pics. Most species caught were Shad, Pickhandle Barracuda, Javelin and Spotted Grunter, River Bream and Tiger Fish or Thorn Fish. Something I learnt today, Thorn Fish breed in the sea during Spring and now we know why they sometimes caught in the surf zone.

Another busy weekend of fishing i.e. loads of sharks were feeding like made, mainly Milkies some were so small we thought they were still breast feeding and they were taking any bait however amongst these greedy fellas some very big shad were caught varying form 3 to 5 KG but no big Kob or Garrick that we are aware of. Flat fish are here and seem to be enjoying the Mullet more than throw baits. An unusual catch in the surf was a massive (for its species the SA record is .7kg) Silver Sillago, it was a welcome guest after all the sharks our group were catching. Gawie was drift baiting for small Shad and even he was picking up sharks and having fun on light tackle, why not try that when the sharks are on the bite. We were flattening barbs to make the release quicker and easier and lost no fish as a result.

Les start with a correction, the 2 boats that went out on Thursday managed some snoek one was just shy of 10kg, why I know this was I attended a braai on Saturday and we ate fresh braaied Snoek. My informant has just dropped a notch or 2. On Sunday some of the guys went Garrick fishing off Richards Bay harbor and one boat managed 2 of around 9kg’s, the guys are catching them from all three piers so if you want to have a go at Garrick fishing from the boats trawl or sit at anchor near the points of the piers, Garrick are surf zone feeders so feed near the structure so they can pounce on their prey, to ensure a hookup, let them run and swallow the bait, if you strike to soon they will hold the bait right up to the boat then spit it just like they do in the surf. Personally I have better luck using Circle Hooks.