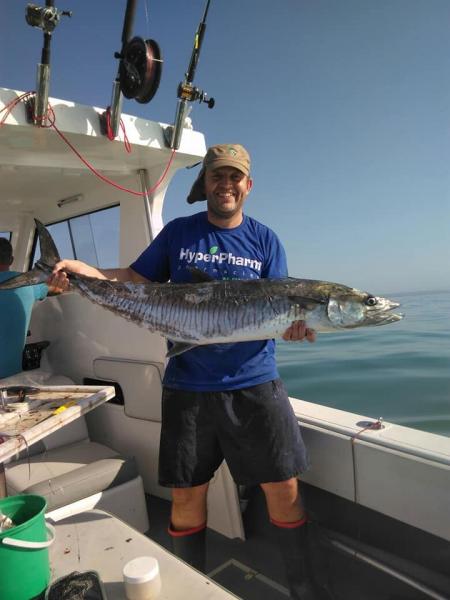 There were a lot of Bream and Spotted Grunter caught over the weekend and with the tides being as they are this week, evening sessions will reward the patient, unfortunately the Bait Prawn season seems to have come to an end so we will go back to stocking the pink prawn, they do work but are not as natural, as I say I am yet to catch a fish with a stove and fish like raw food.

This weekend the surf zone was very slow although some fish were caught they were far and few between. Port Dunford area produced some nice Shad on Saturday and Sunday and seems to be having all the action. This morning some anglers managed some Shad and Pompanos on the main beach. 2 Subsistence fisherman were in the shop buying a cast net on Sunday and were talking about this year being a bumper year after the poor Garrick season of last year, let’s hope they are right.

Wahoo, Sarda Sarda, Couta , Bonnies were boated over the weekend, with anglers fishing both days, although the water was a bit green at Gerries they still managed a Couta on Walla Walla. The Wahoo was caught on a spoon at High Point and what a fight that turned out to be. We are not sure where the other Couta was caught as we could not seem the sign board in the photo. It looks like we going to have a good few months of game fish as the beginning of the season was rather slow. There is a boat out today but I have not had contact with the skipper as to how they got on but we have had 3 stunning days weather wise in a row, long may it last.