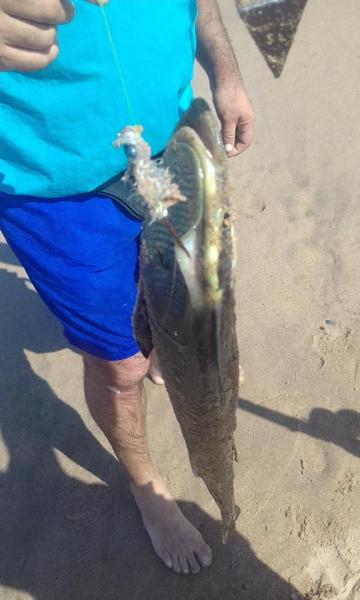 Whilst most people are just happy to sit at the lagoon, relax and catch lots of little fish and spend quality time with the kids other don’t they want to catch something bigger, a few weeks ago we spoke about River Gurnard/ Flathead today let us look at the River Snapper. This fella can grow to 16kg and is also known as a River Roman, Mangrove Red or Rock Salmon. They are ambush predators although they like live bait they are also known to be caught on Sardine, Prawn and Artificial Baits (these been more successful than wet bait). When targeting these species think like them, being ambush predators they need somewhere to hide i.e. structure in the river, under over hanging branches, tree roots, rocks etc. these are places they can hide, on the strike he is going to try bolt back to his hiding spot, the trick is to keep him out, you got to be quick so when targeting there fierce fighters keep your rod in your hand or you will either miss him or get bust up. Good luck and have fun.

Again this place fished up a storm on Friday and Saturday , unfortunately Sunday was a nightmare due to the ground swell that came on during the night resulting in a very strong side wash, this ground swell normally occurs in the winter, the good news is that after the 2nd low today it should have settled nicely( so we predict) . A Remora was caught in the surf Zone this weekend this is also known as a Pilot Fish , what he was doing there is anybody’s guess , maybe he fell off a Zambie going for a Diamond anyway he was put back in to the sea to go find another friend to latch onto. Early on Sunday morning Queen Mackerel/ Natal Snoek made an appearance in the surf zone and 1 Angler who had a spoon got 2 and dropped another, according to the informant they pushed the sprats right into the shore break zone. The informant went on to say he was the only guy with a Spoon nothing like been prepared for the unexpected. (For the past week or so they have been catching them in Richards Bay Harbor.)

Well this weekend certainly was not a great weekend fishing for the Ski Boats, Saturday 2 boats launched early in the morning and we soon back, 1 with 2 Rockcod and 1 with 3 Slingers, no game fish although there was plenty of birds but no bird activity, yet Queen Mackerel were caught in the surf zone during the times the boats were out. Saturday evening saw 3 boats launch of which one was a commercial boat from South of here, After a whole nights fishing 1 Boat had 2 nice size Kingfish , the other a few nice big Cob , of which one was 11kg and the commercial boat only managed about 50kg of fish. I big ground swell came through in the early hrs. Creating a reverse current which made fishing even more difficult, all the boats were safely back just after first light. Yesterday morning Nanook set out for High Point but also returned early after struggling ages for live bait, they did a few turns at High point and a few other spots out there and came back empty.

Kiddie’s clinic on the 24 Feb.