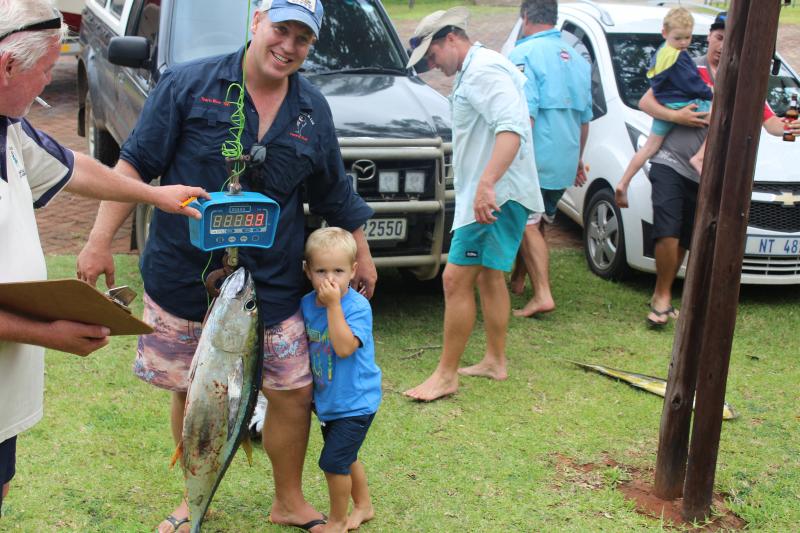 It seems there was a lot of predator activity due to the fact a lot of Pickhandle’s were caught on artificial lures and a lot were lost due to bite offs. Good old river bream were caught and some small cob. Grunter and River Snapper were very elusive possibly that had to do with the way the surf fished over the weekend.

A very slow weekend with very few fish caught, however some really big Shad were caught mainly before the storm hit on Friday night. We think due to the storm we saw very little fishing activity on Saturday. On Sunday the clubs were out in full force and from reports I have received some found it a frustrating day and many anglers packed up before lines up and accumulated under the trees at the ski boat club before bidding farewell to their mates and making their way home.

The Umlalazi Ski boat club fished their first monthly mug of the year and honors were taken by Nick Webb with a 10.5 kg YFT 2nd Pete Harvey with an YFT of 10.1kg and 3rd Anthony T with an YFT of 9.9 kg. 3 fish weighed the same 2 Javelin or Morph Grunter and a Squaretail Cob at 3.1 KG ,most unusual fish caught was a Bartman of 3.6 kg other species caught. Dorado, Cave Bass, Catface and Yellow belly Rockcod, Slinger, Englishmen and Dagaraad. Fishing out at sea was slow going and everybody beached at the last possible minute, weigh in was extended due to the tractor miss behaving at the most crucial time of the day and boats had to bob around in the backline while Wayne and Pat struggled with the tractor.