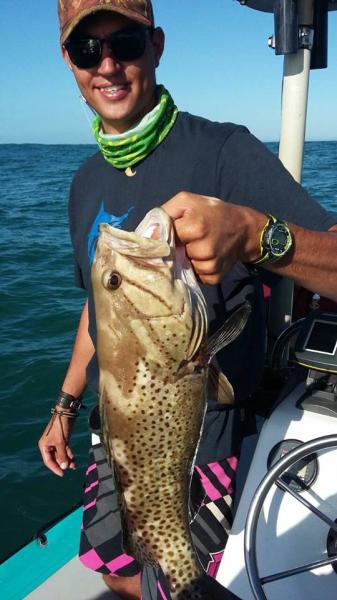 NE gusting 3 then very early in the morning swings to an E still gusting 3kts however during the afternoon the E picks up gusting 17 by early evening. Max temp 32. Wave height 1.3m period 9.

No sooner had I posted the report on Monday when a guy walked in and told us about a big Spotted Grunter he caught early in the morning on a drift bait it sounded in the region of 2kg. Little Honey’s are been caught regularly. A champion Diamond of 55kg was boated near the mouth. The water is clearing up after the rain, time for the river game fish to produce some action.

Was down on the beach early this morning and there is almost no surf, just a shore break, we put some Macs and a Yellow Tail out , by the time I had to leave to open the shop we had one knock. The Angler to our left was getting cleaned up by Puffies, I suggested he move as the Puffies will keep cleaning you out but he said he will wait till they full and they will leave him alone, I think he is still feeding them. At the moment small sharks are on the bite with very few edibles coming out. Endure keep the bait in the water, your luck must change but in the meantime have fun with the little sharks. Doggies , to the left of main beach as well as the Old Ramp had anglers working away but not sure if anything has been beached yet.

Finally Couta were boated together with Queen Mackerel, Tuna and Bonnies in our Bay, the “Harves” were the first boat to catch a Couta and they dropped another on Spoon right next to the boat, this was at North Salmon.  A bus of a Couta (32kg) was boated off Richards Bay. The weather yesterday played its part and a big variety of bottom fish were boated Cob being the dominant species, among the mix were Englishmen, Slinger, Cave Bass (Lanterns), Catface Rock Cod and I am getting old I forgot what else but you get my drift.

News from the shop.

Saturday, around 12 we doing Boerie rolls to celebrate out first birthday, pop in and join us.