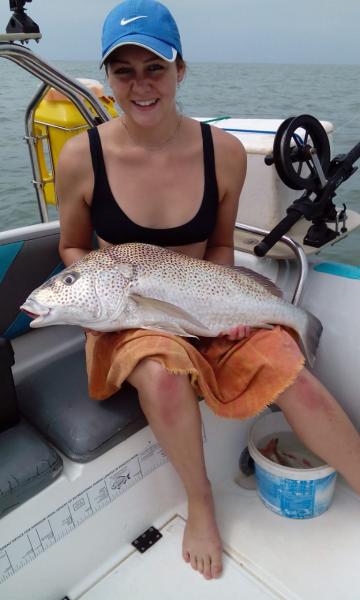 Very fishable this week however Thursday night will bring rain lasting till early Saturday morning, unfortunately low tide is around 11 in the morning however incoming water in the afternoon will make afternoon sessions more rewarding.

Probably one of the great catches over the past week was a Diamond caught by Ross of about 20kg on 5.5kg and breaking his finger in the process. This is how the story panned out, when the fish took off they realised they must chase it so while Hilton was lifting the anchor Ross tried to pull the motor however the motor was in gear and you get a sort of kick back on the rope hence the broken finger anyway broken finger and all he landed his fish, well done. From time to time Kob are been caught in the river during the day and the odd one makes size, they are a bit early. Pickhandles, River Bream and Snapper are still in the lagoon, some size Bartails have also been recently caught.

At last some Diamonds were caught, young Fergus arrived from inland and in his first session in front of the Forest Lodge he got 2, 17 and 50kg and Susan fishing at Port Dunford got 1 of 35kg. Gerhard fishing with Susan got a bus Shad of 6.47kg. Fishing the Banks area was slow over the weekend as when the tide turned it bought weed with it, I have not heard of fish coming out at the Southern section of our area. Deon and his club from the south section left the banks and crossed over to Port Dunford and they all got fish, although it is a mess when you get there walk up the beach for a few hundred meters and you will find the beach much cleaner.

For a change some nice fish were caught over the weekend, Frigate, Wit Oliphant and Wrighway got Couta and nice sizes at that, most of the Couta boated were around the Gerries Pats and Edwards area. Johan struggling for bait got 1 Pinkie and he put it out and got a 17kg Couta, on Sunday he took his daughters  Mika and Gitta out and they caught the following species; Big Eye Kingfish, Cock Grunter of 5.3kg, Lantern, Big Eye Stumpnose and nice Kob it looks as though Gitta got the most fish. Sarel on Kiru fishing out deep got 3 big Dorado unfortunaly   Dominic on the boat with them blanked.