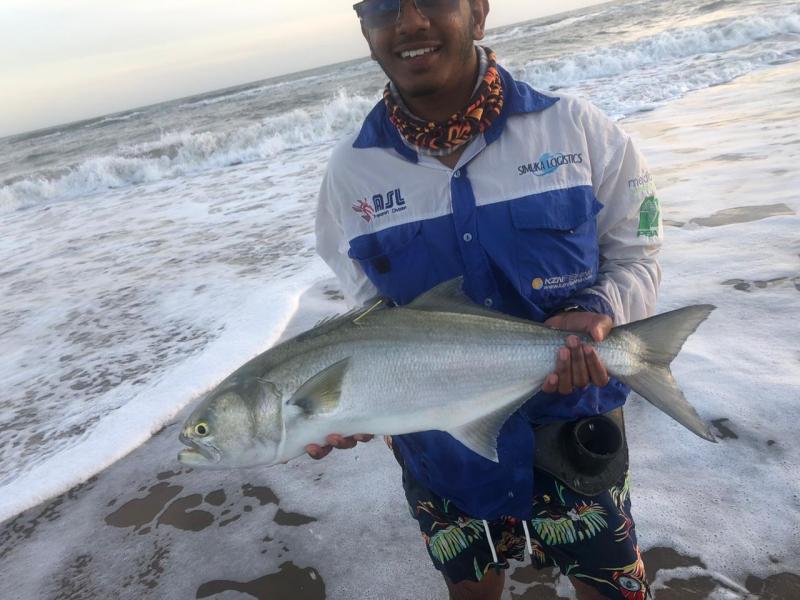 Warm days and the wind is playable however we on a low barometer most days so hang in there and chill fishing we expect will be slow still applies for this week.

The little Honey’s are still in the lagoon and a dead one was found, we are not sure what caused it to die but I suspect it was “turned over “to remove the hook, Dwane sent some pictures on the correct way to safely remove the hook and let it go, turning them upside down can cause the internal organs to twist and hurt the animal. Reports of nice size Shad were reported in the area of the river mouth with most fish been lost near the vessels due to bite off, when they are around use a short piece of cable as a bite trace.

Young Kelan on Saturday set off with his dad for a afternoon trip to the beach and managed a 69cm 4.32kg Shad which he number plated and released, well doe young man, lots of reports of small Shad , Hammers and Milky’ s been caught but if you persevere through the rats and mice a bus will pick you up. Sunday was a blow out of note but during the past week a lot of catches made with the odd flat fish, the Diamonds are not as plentiful at this time of year unlike previous years so maybe we will have a longer and later run of them, as I said to someone you have more chance of getting one in the river especially near the mouth.

On Saturday we had an emergency when a jet ski broke down just outside the mouth and was drifting towards the back line, the skipper was advised to deploy his anchor and keep a flair handy but not deploy it yet. We then started phoning the boats on the water and got hold of Donald who was miles away, Johan got hold of Ernest at the wreck and he offered to assist on his way back 2 other Jet Skies arrived on the scene and tried to assist, as luck would have it Gert walked into the shop and offered to assist as there were 2 people on the jet ski that had to be taken off so the jet ski could be towed in, he hooked up the guys and the recovery began and all entered the lagoon safely, big thanks to Gert and the other jet skis that waited for the rescue to commence, great team spirit shown by all. We do have a VHF radio in the shop but the land lady won’t let us string a copper wire along the facer boards to get very strong signal, having a radio in the shop as it is open 7 days a week will go a long way to assist with boating safety, I will try ask again, using cell phones does not work very well as most skippers and crew stow their phones but the radios must always be on. Frikkie got a nice Couta (14kg) earlier in the day whereas most boats reported Slinger and the odd other fish been caught.