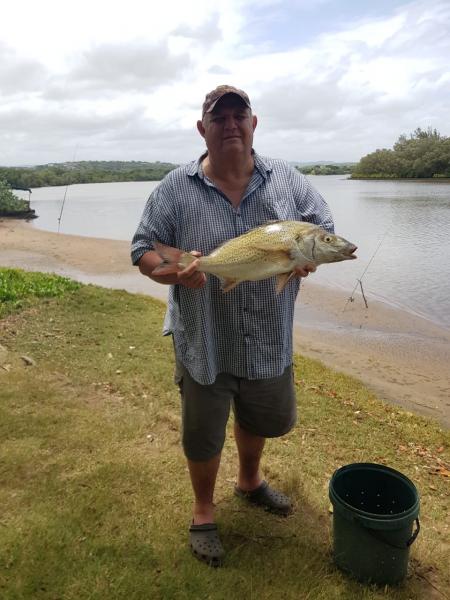 Typical Monday the weather is great for fishing but tomorrow and Wednesday are a bit like the weekend with a lot of wind however Thursday going into the weekend the weather improves but early days things can and probably will change.

Great excitement in the main Lagoon car park when Mark landed a 3,2kg Spotted Grunter, Mark is better known for his skills at Kozi Bay and it was probably those skills that got him this fish, watch him next time. Also over the weekend there were a few Honey Comb Rays caught, please be gentle with them and don’t flip then over to get the hook out, if it swallowed the hook simply cut it off, they do not bite so you can safely put your fingers in its mouth to get the hook out by lifting its head up slightly.

Walter Maxwell had the world record Tiger Shark for 40 years until a fella in Australia beat him by 5lbs in 2004, so Chris’s Tiger is probably the biggest caught in Africa. Talking about sharks in the MPA you may catch sharks from the side but must release them as you may not be in possession of a shark at all. Now for the people who catch baby sharks and through them on the side or burry them think they are ridding the sea of baby sharks I have very sad news for you, you will be prosecuted and you will receive a criminal record do the right thing and put them back in the sea as sharks are under enough pressure to survive without you making things worse. Some guys did try fish over the weekend and the only way Rudi beat his wife at fishing was to sneak out of the house very early in the morning leaving her asleep, he managed a small Scalloped Hammer Head and a Spinner shark. At the moment there are a lot of baby sharks been caught, please could you send me photos of the underneath of the shark and try focus on the area between the pectoral fins as this is where the umbilical scar can be seen I forward it on as it is part of a research project, I also need to know where it was caught please be honest I will not share that information if you don’t want me to except for the scientists. Please measure them flat and not over the body.

These guys must be getting desperate to go fish as the conditions have not been favourable for some time now. I believe Action braved the seas on Saturday but I have not if the boated anything.